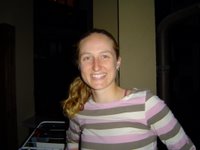 Well I’ve now competed in my first ski race; both Classic and Skate and the first race of the 06 season. This weekend Telemark nordic centre just outside Kelowna BC hosted a pursuit style loppet. Keith and I left Chase just before 6:00 am in a blizzard and drove to Kelowna. After arrival we headed out for a scant warm up and wax check. Man were we in trouble. People we’re flying by us on the uphill as we struggled to find grip. (Did I mention I now have 7 classic skis under my belt). We rewaxed and headed to the start line.

We lined up for the mass start. Racers ranged in age from 14-69. I gladly parked myself at the back of the pack and waited to see how the pandamonium would unfold. After the GO and a whooping cheer from the racers we were off. I quickly realized I wasn’t going to be last afterall and worked my way up through the crowd on the first climb. Those who had chosen the wrong wax were off to the side scrapping the snow from their skiis. I soon realized that grip wasn’t a problem. I'd just run up the hills letting snow stick to my skiis for grip and when I got to the top the snow would slide off allowing me to glide again. (I’m sure a good skier is shudderring right now). Basically I think I ended up running 10km with about 5km of glide. I had a hoot on the downhills taking the inside line and going into full tuck past the snowplowers. My brashness only back fired once when I slid out and went down. There were tons of hills.

We switched to skate skiis at the 15 km mark. My skiis felt a bit slow, but I reeled in a couple people and was passed by the fresh relay racers. I was becoming severly dehydrated and the word Sufferfest occupied my mind, but about 5 km from the finish i started feeling good and powerful and was able to pass the girl in front of me. Then was passed by the girl behind me. Ha that’s racing. Unfortunately my technique didn't allow me to keep up with her and she beat me to the finish line by about 10-20ft.

The fastest women in my age group gave me a solid whooping, but I’d like to think I held my own. The total 30km took 2hr 17, not very fast conditions. My ego is happy to report that only 1 woman 50+ was able to gloat at their victory. But anyone who saw me race and thought “there’s no way someone with that technique should be beating me” will be pleased to know I am incredibly sore today.