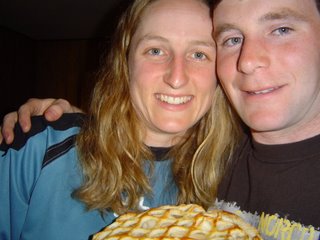 Getting our Just Desserts

Since it’ll be our last weekend together before I head off for the Eastern Canada Cups and Norbas Keith and I figured we might as well do a 6hr team relay. Every year Salmon Arm hosts the Salty Dog and all sorts of cycling enthusiasts of various ages show up.

After a couple bad race starts I decided my focus would be getting in a solid start. At 10:00 I parked myself on the front line between two pro men. We punched it up the first fire road, but my lack of warm up was quickly apparent. After climbing through a bunch of punchy single track I was able to turn my legs around and reel in most of the guys who had gotten ahead. I entered the woods and the super long single-track in 5th position. The trails were really fun and flowy and before long I was back at the start. Our plan was to start with 2 laps each and then go to single laps. I guess I was a bit zealous that first lap trying to keep up to the boys and my legs were feeling it 2nd lap but we maintained position. Back at the start Keith was ready to punch it and took over for 2 consistently fast laps. Always coming through the pit with a big smile as the course ended with a descent.

4 laps down and about 2hr 40 into the race we decided to mix things up by switching over to my EXC 1.0 FS from our hardtails. After my legs stopped feeling like crap I was able to get back into rhythm again climbing consistently. I wasn’t prepared for how different the descent would feel on a dually. Oh my god! It felt good. The bike was totally dialed for the course and I no longer needed to work to find my descending speed. To stay in a rhythm I headed out for another lap rather than trading off after one. Keith then hoped on my bike and headed out for 2. His first words when he came through the pit area was “This bike is fast!”. So it wasn’t just my perception.

Keith finished his second lap and our 8th with the overall race lead by a couple seconds. We had time for one more so I was off. This time I had done a spin between laps and was feeling way better. I had a really fun last lap and was able to hold onto the overall by a couple seconds. Bryan Cooke (Canmore Bicycle Café owner) Did it solo and finished 9 laps in 6hrs, less than a minute off us! Pretty wicked ride.

I think everyone had a great time. The mellow race atmosphere was fun and the Apple pie prizes Superb!