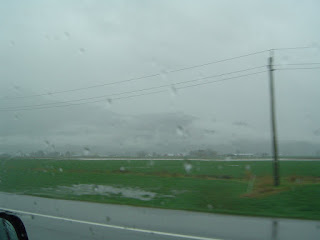 Ahh...looks like spring on the coast....this was the day I road raced. There were posted road flooded signs as we entered armstrong

With me back to 3 days a week of work and Keith on Spring break it was a good time for us to get away and hopefully get in some mtb miles. Scanning forecasts around the province we decided to start our 4 day trip in Penticton. Penticton has to be one of the lesser discovered riding mecas in BC. It has both phenomenal road and mtb riding. We were on a mission for trails though and got 7hrs in over 2 days there. Next time your in the area stop at the Bike Barn and ask them where to find a trail called Rebellion. You won’t be disappointed. We stayed with the Prowses, who were once again amazingly hospitable and a great example of how to live life as they continually pursue their passions – be it bicycles, pottery, music or starting their own vineyard.

It would have been easy to stay in Penticton longer, but I was scheduled to be at Norco Tuesday morning. So Sunday night we headed to Van and crashed a night at my brothers place. Monday morning Keith and I grabbed breakfast at Tommy’s in North Van where they play mtb videos not stop on the TV. From there we did a couple errands and then joined up with my coach Dan for a “recovery” wet/sloppy mtb ride in the endowment lands near UBC. A couple coffee shops later and it was Dinner time. We hooked up with our friends Jen and Chris and my brother Geoff and went out for a ridiculously cheap Sushi dinner at Shabushen. We ordered together and got a great tasty spread for $6.50 each –totally the way to go with Sushi. 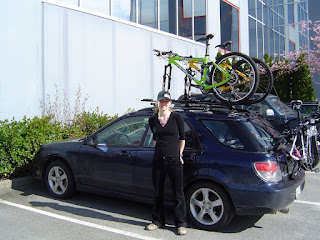 Tuesday it was off to Norco in the morning to pick up our new road bikes and take a sneak peak at my new mtbs. I got to hang out briefly with our team manager Mark before he rushed off to another meeting, but not before hooking me up with some parts to make sure I was ready for my first race. Stopping by Norco always helps get me pumped for the season. There’s nothing like having a great crew of people who believe in you to make you want to go fast for them. 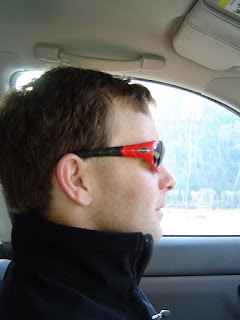 Keith behind the wheel on our quick, but great bike trip
Am I crazy?
So Saturday was supposed to be a decent day in Kamloops, but I had a tough work out scheduled and a brand new road bike –which is awesome by the way - Very smooth comfortable ride, flawless shifting and great handling. The forecast called for an ugly day in Vancouver, but Keith was game to head down with me for the spring series race. It was in Armstrong so only a 3 hr drive which meant a reasonable 6:00 wakeup. To use an expression my mother dislikes “It was piss pouring rain” down there. Absolutely disgusting, but there were tons of people out and ready to race. It was a pretty good loop and good field size and I was soon getting the hang of road racing again. On lap 4 I flatted though and was forced to ride slowly soaking wet and hoping keith might come by with a wheel. After a long time I was able to get it fixed and hop back in with the group, but one lap down. I wasn’t sure if I’d be able to warm up again, but I was having fun so bargained with myself for just one lap more everytime I went through the start finish. The problem with missing out on a lap though means that you don’t really feel like you can try anything cause you’d be a chump. Knowing that I couldn’t honestly contest the finish I pulled the plug on lap 8. I had gotten my required intensity for the day and felt I’d be better off staying healthy ie; getting out of the rain and back to Kamloops in time to do a hike and scout out trail conditions on our favorite in-town ride area, Mt. Dufferin. We did just that and this time didn’t hit a dreaded snowstorm coming out of Merrit meaning we weren’t to be greeted with fresh snow upon arrival in Kamloops.

My friend Jen ended up 6th in the race. She hasn’t finished outside the top 6 in the b fiels at the spring series races and is establishing herself as the woman to beat on the road in BC

Anonymous said…
great blog Kika. And you are right about me not liking the term. :)
Love Mum
5:53 PM