- April 26, 2007
I just picked up my new bikes Monday. Yeah! They are awesome. I’ve only ridden my sub 23lb hardtail up and down the street getting it dialed in for fit, but took the Faze off road Tuesday and was so impressed I decided to take it to the next 2 NMBS –formerly called Norba races. Being a bit of a die hard Hardtail rider I knew I had to dive in and race the dually now to give it a fair chance for #1 bike to my heart. 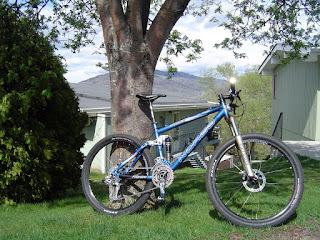 It feels really great climbing, which is what your racing concern would be with a dually, shockingly so actually. With the propedal on I could swear I’m on a HT, but then I hit a descent and yup I’ve got the advertised 89-114mm of travel (approx 4-5 in). It looks freaking Gorgeous too and handles smoothly.

So what’s new with the Norco XC bikes this year? Although they’re looking flashier and sexier than ever, the Geometry is still very similar so you know you’re getting that same great feel. There are some small, but noteworthy changes. They have switched to triple butted M6 aluminum making it as good as it gets and bringing weight down a bit. So I’ll detail the Faze first since it has gotten more attention from me so far.

The faze –formerly known as the EXC FS – has trimmed its name and its frame. Gone away are the extra reinforcements that weren’t need for an XC dually. (If you’re really into the big stuff check out the Fluids, Shores and Sixes. They do not disappoint. )
They’re also now stocked with a 100 ml fork (last year had a 4-5 inches) which steepens the head angle (70 deg) a bit putting you in a better climbing position with a bit more weight over the front meaning it corners great.

Although the Stock Bikes comes with XTR and Fox making it a competitive 25 lbs, Factory team riders are running SRAM and Marzocchi. After spending the last two Seasons on SRAM I am really stoked to be on it again. The 1:1 ratio makes derailleur adjustment less finicky which is especially nice for on the fly adjustments on the rare occasion they’re required and it always shifts under torque. We’ve added some more SRAM to the program this year too with the addition of Avid Juicy ultimate brakes. The levers feel great and the braking consistent and positive. 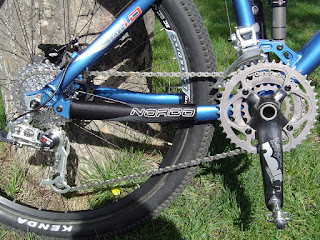 For me the biggest change in feel in the two bikes is probably due to going from the SDG saddles and seat posts last year to a Truvativ WTB combo this year. The SDG which had a slacker angle than the Truvativ posts meant that with the higher front end of last years bike (even without this) I had the seat pulled way forward on the rails to get my weight to where I wanted it. This year to achieve the same reach I can place my seat in a more neutral to behind centre position so it doesn’t look as funky.

WTB is a new team sponsor this year supplying us with seats and wheels. I’ve got both the WTB Devo and Diva saddles to try out. The Devo is currently on the dually and the white Diva looks stunning on my off white Hardtail with the goldish taupe fork.
For Wheels I’m running the Laser Disc XC’s. These rims were a dream to Stans up with my Kenda Small block eights. I didn’t have to drill out the valve or bulk up the rim centre to get tires to seal. It was as easy as using a tubeless rim to mount my tires and I am now back to Tubeless after a year astray. Yeehaw. The wheels look and feel good, especially laced up to my beloved DTSwiss 240 Hubs. I swear I gained 2 minutes when I switched to buttery smooth DTSwiss hubs. I’ve got an 8 year old set of Hugi that are still smoother than other “top of the line” hubs I’ve had for 2 months. 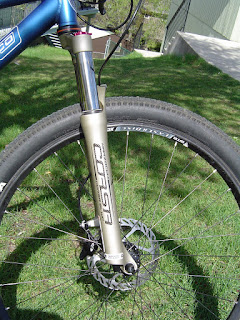 Marzocchi. Good work with the Corsa guys! Marzocchi made some great improvements to their XC fork this year. The Stanchions are now Nickel plated so have less initial “sticktion” (sp?). They have also dramatically simplified the set up by going to 2 air chambers over 4 on last years’ model. You’ve got positive air on top which I’m running at 75 for my weight and then par on the bottom of the same leg which I set to 110psi. They take much higher air pressures this year and feel amazing and plush. If it feels a little sticky, speeding up the rebound on these forks makes a much bigger difference in feel than with other forks. On the right leg is a TST cartridge, but no adjustments are necessary to this side. I’ve only got 2 hrs on my fork, but have felt Alison Sydor’s which she’s run since Roc D’azur last fall and of course it only gets better. The lock out mechanism is also improved making it easy to use without the remote lock out.

Truvativ (Sram) brings the finishing touches to the bike with a whole lot of Carbon –juicy levers, XO shifters and deraileur, Handle bar, Seat post and the new Noir Cranks. It’s a very racy looking bike and it performs as good as it looks. 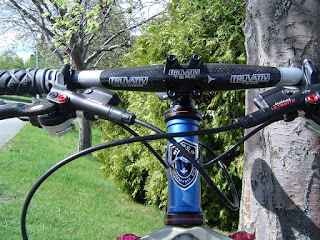 I’ll wait till I have some pics and more time on the hardtail to fill you in on it. Right now I’m in California for 2 weeks and two sets of races so it’ll be a bit. I really wanted to bring both bikes, but wasn’t keen on separating bikes from wheels to fit them both in the box… wheels and no bike or vice versa would just suck.