Trip to the Matterhorn!!! 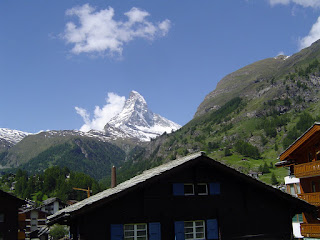 After the race Sandra and I packed up our stuff and headed west towards the Matterhorn. We overnighted in a really neat town called Leuks in athe castle below. 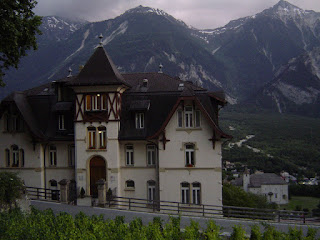 In the morning we awoke to the sound of a marching band. We rushed to the window in time to see the band just come into view. Almost as soon as we spotted them though they stopped playing, a bus drove up and they all loaded in. It was the most bizarre thing ever.
After Breakfast we headed to Tachs and I got to do my first real Euro driving. The speed limits on twisty roads there would never be approved here. In Tachs we took a Train to Zermatt at the baseof the Matterhorn and then the Gornergrat up to 3200m. 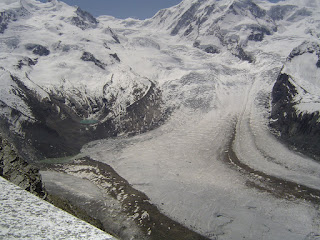 Back in Zermatt we had a disappointing spicy cheese fondue recommended by the lonely planet before heading back to Tachs.

From there we had to take a car train through a tunnel into the Bernese Oberland. As we drove onto the car train I said “Wouldn’t it suck if the car in front of you stalled when you had to get off”. The train ride was much like an amusement park ride. There were no lights and you kept expecting a sudden lurch. At the end car started up and sure enough the car directly in front of us stalls. I hope out and start pushing the guy in his Audi off of the train. It was pretty hilarious and I couldn’t help giggling when he looked in his rearview mirror.

We made it back to Sandra’s Family in time for Rosti. At 4:30 the next morning I was off to Zurich.