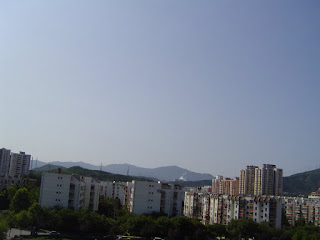 From my hotel window. The hotel had all the luxuries of home...except a smokefree environment 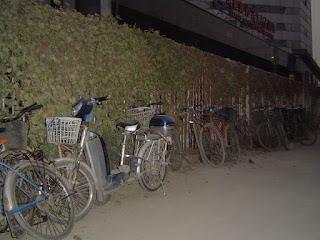 Kiara and I flew from Graz - FrankFurt - Beijing. We had been expecting to travel with Max as well, but I guess he wasn’t feeling up to the trip. As we waited to board our plane we saw news flashes that a typhoon was to hit Shanghai that evening. Great.

It was another sleepless 9hr flight for me, but the time change was only 6hrs from Europe so it wasn’t too bad to switchover. A “Goodluck Beijing” Team was there to pick us and the Aussie’s up and take us to bike storage and the hotel. We had to store our bikes at the mtb venue, as will be the preocedure for the Olympics, and then stayed at a nearby hotel as the Athlete village is not completed yet. It’ll be about 25km from the venue. The skies were clear and the pollution not nearly what I had expected. Maybe Typhoon Wipha had cleared the air for us.

China was a different travelling experience than any I’ve had before. Usually I can feel my way through an area, but with all the signs being in symbols rather than letters I was hopeless to guess at what I was reading. 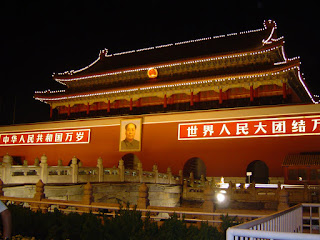 The hotel was nice, but allowed smoking… except in bed of course. It served us western style chinese food which was a bit dissappointing, but still pretty good. Everyone was trying so hard to please that it was like we were being constantly followed and greeted everywhere we went. That night we headed back to our rooms after super. I looked out my bedroom window because I could hear music and the square behind the hotel was filled with people. Hundreds of people were out there line dancing, exercising, couple dancing and playing music. It was crazy and Kiara and I wanted to be a part of it so we ran down and joined in. Just like at home there was a group off to the side in the shadows of a tree fumbling as they tried to learn the steps. We fit in there perfectly and joined in for several dances before heading up for bed.

On Thursday Kiara and I did 3 laps of the course. We monitored our body temperature in the heat (about 30 so not extreme) by ingesting a pill with a thermometer in it and wearing a monitor. We also experimented with cooling vest as it is anticipated to be around 42 with the Humidex for the Olympics in August. The course is well shaded, being predominately double track in the woods, but it’ll still get warm.

The course is interesting. Traction is awesome, hard packed and smooth. It is definitely a power course with many short steep climbs. Although the base elevation is 68m and the max elevation 125m the course is for the most part climbing. The descents have had rocks planted in them adding new meaning to the term "Rock Garden". There's a couple of little drops with young officials yelling out caution so we don't hurt ourselves! The venue has transformed since we got here with flags and banners going up and sod being laid down. We will do 7 laps of the 4.5 km course.

On Friday we did another 2 laps and Ben the exercise Physiologist took some video of different sections and riders. Back at the hotel with time to Kill we had one of the volunteers take us shopping at the grocery store across the street. We needed someone to explain to us what the foods were that we were seeing. She was a great help and Kiara and I got a couple items to sample.