- September 25, 2007
The polution is definitely more noticeable today with the haze dexcending into town, but there is a nice breeze keeping it cool and clearish. The women raced at 11 and the men at 2. There were 24 starters in the women’s field. Only certain high ranked countries were invited and each could send 3 men and 3 women. Some nations or riders were not invited to participate, but travelled to China as Staff so they could ride and check out the course. Gunn rita was there, but did not race. There were atleast 5 different teams from China racing and I was a little curious of just how many uber fast chinese girls there were. The race was an opportunity for riders and staff to learn as much as they could about the course, conditions and logisitics. Some riders treated it seriously where others were their purely for information.

I decided the best way for me to get valuable information was for me to race the course like I would any other race. It was going to be tough. There is no recovery on the course featuring many short steep climbs. It’ll be hot and the air might be bad. Again we monitored my core body temperature throughout my warmup and race and will be able to compare that to heartrate and lap times.

I was given Lucky number 13. I know the Chinese read a lot into numbers. 8 is a lucky number so the Olympics will begin the 8th day of the 8th month, 2008. 9 signifies longevity. I’m not sure what 13 means to them…. But hopefully something like a promising future! I had a typically bad start and found myself in the last 5 headed into the dirt. On the climb I picked some girls off, but not enough to have a clean and traffic free ride up the steep poppers where girls were veering in all directions. 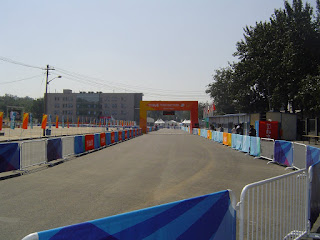 Start/Finish area
The race stayed together for a long time as the terrain wound up and down with lots of super sharp turns. By lap 3 Ying Liu was off the front – I honestly don’t know if anyone tried to go with her. Sabine was leading a group of 5 with Rosara, Gould, JingJing, Lene and myself. I could tell Sabine was just setting pace and not full out racing so I decided to see what the course was like without traffic. I passed the line of girls and took the front with JingJing hoping on my wheel and overtaking me a couple climbs later. I think this split the group apart and made things more interesting. I came through that lap in 3rd, but Sabine passed me soon after and me, Rosara, Georgia and Lene rode in and around eachother for most of the remainder of the race. My legs started feeling fatigued and I could swear my seat felt too low. I was feeling some cold chills in the woods. I kept looking down at my knee angle, but it looked okay. I caught and passed Rosara who looked to have blown. On lap 6 I could no longer deny that my seat was too low. I hoped off and sure enough it had sunk an inch. Here’s a lesson for you. Don’t put energy gel wrappers in the same pocket as your allen keys. It makes them hard to open! I got my seat adjusted and was back on without out loosing too much time. Lene and Rosara had repassed me, but when I arrived in the feedzone I saw Rosara had stopped feeling sick. Feeling much better with the right seat height I set out to attack the course once more. Maja Wokowlski caught me on that lap though and I finished in 7th. 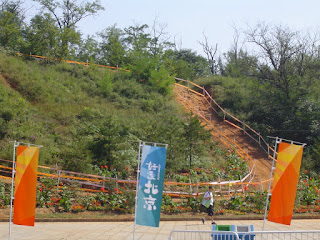 The final descent has had rocks planted on it.

It was a good race and a good course. I think if I’m back next year I will be ready and able to race it hard and well. Being in China was definitely some motivation, but it was a little bittersweet as it is likely that either Kiara or I will have to stay home with Marie Helene being the favorite for one spot. Kiara had a tough race hiting her handlebar on a tree while descending and being flung from the bike. She tried to get back on, but was unable to pedal due to bruised or torn muscle. She’s walking around fine now, but is a little tender.