Ahh, it is good to be home! 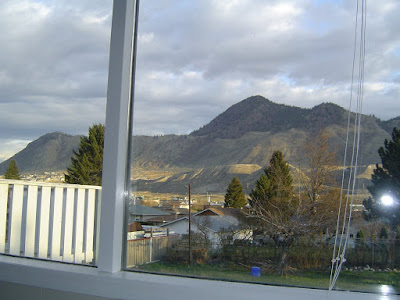 I got home late last Monday after a flight delay which leads to a missed connection. I’m pretty used to airports by now though and found a nice little area to finish watching 24hrs solo on my computer and do some stretching.

Just being away 2 weeks has lead to a lot of catching up…. Well maybe it was the 100 lbs on new gear I brought home and had to unpack plus the two bikes I had to assemble. All good though! I kept myself very busy till Keith got home from work and we headed out with the guys for the after work group ride.

The guys have been busy while I was away and there is a very cool trail network arising from the dead pine debris littering Kamloops.

Keith and I have gotten in a couple great rides and I’ve gotten in some miles on my new Orbea Diva road bike. I’ve never had a 16.5 lb road bike before and am loving being back on Durace!

Friday night a bunch of us headed out to the local pub for Buffalo burgers and beer. It was a great time with all my favourite kamloopsians there. Such a wicked group of people have gravitated to Kamloops for the trails and lifestyle.

Saturday, as well as being the warmest day of the year so far at 22!!!!, was the Annual Kamloops Hall of Fame Banquet. This year I was nominated alongside local Ironman athletes Ivonne Timewell and Anna Desireau. All I can say is that I’m lucky they have to divide their talent and training time amongst three sports, because they’re some pretty accomplished women. I was able to walk away with the award for the 2nd year, but know they’ll be putting up some tough competition again next year for the honour.

Like the view from the new house :)
See you over in Europe soon.