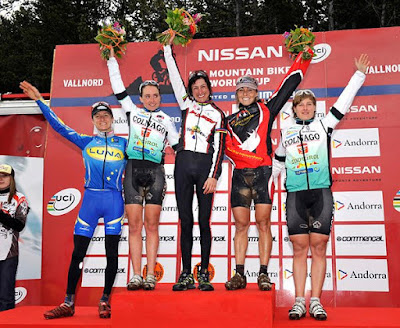 Getting a top 5 has been a goal of mine since Worlds last year. Today it happened. After 2 days of great sunshine in the Pyrenees ending one of their rainiest springs, the skies again opened up this morning. Even though I just arrived Wednesday (and had to buy a new plane ticket in Paris after learning that I was supposed to fly to Toulouse from another airport) I have been feeling great. The time change and travel didn’t seem to be wearing me down, I loved the course and I was in a new and beautiful country with sunshine and snow.

This morning, after a less than stellar sleep (I know I got at least 3hrs), I was still feeling good and pumped for the race. During warm up I knew it could be a good day. The course was getting greasy and rutted, but I liked it. Off the start I moved from front row to about 30th with a colossal pedal miss. Loosing a couple seconds when everyone else is sprinting is pretty significant. From there it was time to regain positions. In the woods I was able to pass a lot of people by taking the less favoured rooty lines. I actually had a girl grab my arm to stop me from passing her. No names will be mentioned though;-0

I got up to Katerina and we worked together to bring in and pass a bunch of girls in the woods. Soon enough I could see Marie Helene and Ying. Ying was descending well, dropping Marie who had frozen hands, but we eventually overtook her and moved on to catch Eva Lechner. I remained in contact for a bit, but once the gap formed all I could do was maintain it, but not catch them. Fullana went off the front lap 1 and was not to be seen by us for the rest of the race. I am stoked to have posted the fastest lap of the day on lap 2. I had so much fun on that course. Well on everything but the shale/grass off camber switch-backing ski hill climb. Sucked pretty bad on that!
So it was 4th for me and my first World cup Podium and 6th for Katerina – both personal bests. Georgia had a bad day and finished 17th and we were able to grab the #1 Team position again. Kiara rode in 13th, Sandra 29th and Wendy 33. That’s it for the canuck contingent, but Geoff Kabush raced a wicked race and finished 3rd!

Terra said…
AWESOME JOB GIRL!
I will keep following your killer successful year. I am rooting for you!
Your CA roomie- TC
3:46 PM

Monilee said…
Nice work Kika!! I have my fingers crossed for the Olympics!!!
10:14 AM

Anonymous said…
Good!!! Kika Congratulations!!!
A friend of mine told me that he met you in Andorra, is so funny, you have met a lot of chileans friends on the races ajjajaajaj
Hope to see you in the WC in Canberra, because I'll be there.
Cheers!!

We check out your Bloggle every week, your a true inspiration. Lots of love from Fredericton,
Donnie, Loretta, Ryan and Breton McPhee

Great to hear from you guys! Donnie, Hope you're still schooling the youngings in Ulitimate! Would love to see how the kids have grown
5:58 AM