The "quick" update on what’s been going on.

- October 17, 2008
Although the Olympics have passed, the season was and is still full of adventures. After Australia Keith and I joined up with our family to share in my cousin’s wedding celebrations in Calgary. I was able to steal my parents away for a couple days so they could visit our new house and spend some time with us in the loops. Only 4 short days later though I was back on a plane and headed to Austria for World cup finals.

I lacked a little lustre for the final, but held on to 8th behind team mate Katerina and clinched 2nd overall in the series behind fellow Canadian Marie Helene Premont. Georgia took 5th overall. 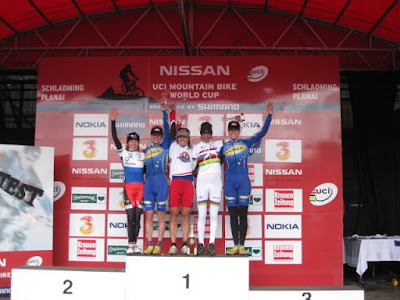 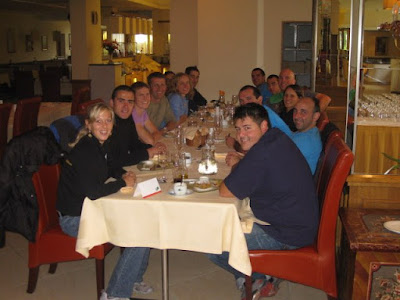 Lunch with the Orbea teamin Austria

1 week back at home and I was off to California for ClifBar’s Epiphany ride and Interbike. At the ride we did 30, 50, 90 or 150 miles…depending on motivation and bets placed. Every 1.5 hrs we had cliff product breaks to help us along the way. The ride recreates the day owner Gary Erickson decided he had to come up with a GOOD energy bar. 180 people did the ride which was capped off with a big dinner at the end, all in the lovely Napa Valley.

From there it was off to Vegas for the dirt Demo…where I got to ride with old Buddy Jay hoots from the Norco team and Fredericton shop owners Mike and Bryan. I was also on my new Orbea Occam (5 and 5) which was loads of fun. From there it was 3 full days in surreal Las Vegas interbike. You loose track of the time of day easily in Vegas, especially at the venetian hotel with its indoor canal and sky like ceiling with varying light. Here we caught up with sponsors, checked out product, signed autographs, and ate our fill of new cliff products like the protein rocks. 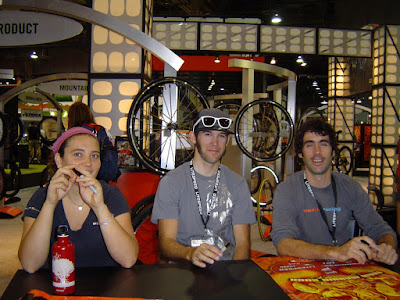 I arrived home from vegas the same day as Catherine Vipond and Matt Hadley moved out to Kamloops and into our home. It’s been great having them in town and now I have coworkers! In two short weeks we’ve accomplished a lot. Matt and Catherine collected 120 lbs of apples from a neighbours neglected trees and the pear tree in the back yard has provided just as many pears. We’ve been drying fruit, making crumbles and sauces and, well, eating a tonne of fruit. 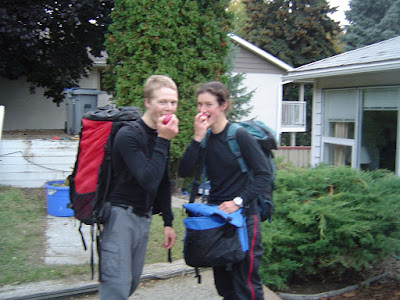 That's all apples!
Catherine and I have teamed up to be construction phenoms creating a bench, putting up walls in 2 of 3 rooms in the basement, and landscaping. The boys helped a bit with the walls to, but we seriously did lots. Matt has created a compost and shelving system and accommodated the hanging of 14 bicycles in one room. Geoff and his girlfriend Liz joined us for thanksgiving so the fun and creating continued. Geoff and Keith made some outdoor steps while Liz and I prepped the turkey and made pear compote…well she did all the work on that one. Geoff gave us spandex weenies a dirt jumping clinic at the bike ranch and we all got in a good ride to the top of Rio...my new favourite trail now that I have a bigger bike! It was a great weekend with friends and family. 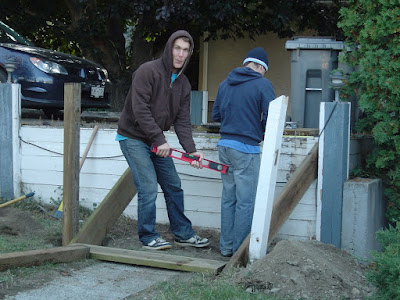 Geoff and Keith hard at work 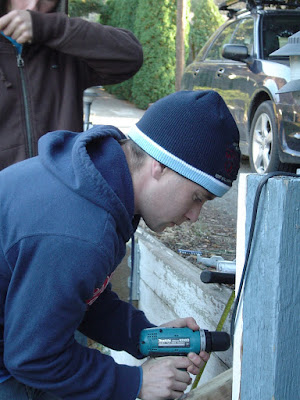 Who's that hottie with the power tools?

I’m loving the change fall brings. I’m still doing lots of riding, but nothing structured, hiking, running, trail building and doing tonnes of renos. The people at home depot & Rona recognize me now. Night riding is super cool right now with all the leaves on the ground and I love the freshness in the air.

I’m off to NB for a week and then training will begin. The fall is still a time for diversity though so I’m taking and anatomy and physiology course and still have tonnes of home projections planned….like whipping out my new sewing machine and making some sweet Halloween costumes!

Anonymous said…
Hey! Just wondering if you are blogging this anymore...?
2:26 PM