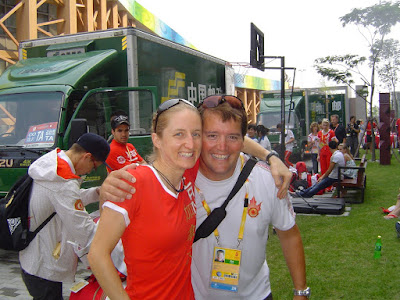 A huge congratulations to my Coach of the last 6 years Dan Proulx. Dan has just been officially announced as the new Canadian National Mountain Bike Coach.

When I met Dan back in 2002 during the UVic Triathlon club bike sessions I had some pretty huge weaknesses in my riding. So much so that when there was only one position available on his women's development road team I got overlooked as not being strong enough. Luckily Dan did see some potential and we started working together the fall of 2003. The following summer I found myself 2nd overall on the Canada Cup series and invited to World Championships as the 7th member of the Women's national xc team.

From there things kept getting better. Dan always managed to get me to peak form for Nationals and after a couple years together and some trial and error we were able to get that second peak for worlds in September.

Dan is unfailingly positive and really believes in putting athletes first. I'm excited to welcome him to the National team and am sure other athletes will find the success I have by having Dan as part of their team.