I’ve been intending a blog update for ages, but with being home and actually able to keep in regular contact with friends and family I guess I just get a little lazy!

November 14th marked the beginning of ski season here in Kamloops and Matt, Catherine and I took advantage of opening day at Sun Peaks to play in the snow and soak up some sunshine. Poor Keith stayed home with the flu. 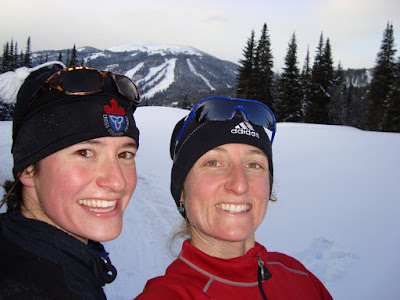 Catherine and I happy for some snow

Just as I was getting my ski legs though I was off to Cuba for a trip with my parents. In 2001 I lived in Cuba, in a small town called Pina, or Ciro Redondo for 3.5 months. I lived with an amazing family and cuban counterpart, all of whom became good friends. So my trip to Cuba was both a chance to visit with them, visit my parents who live on the other side of the country and take a training get away.

The cheapest, although definitely least authentic, way to visit cuba is with an all inclusive package (particularly in the low season). My parents and I arrived in Cayo Coco before lunch time and as they headed down to the beach I thought I’d get in a little run.

I had forgotten just how horrible it feels to exercise when you have zero heat acclimation….not to mention getting up at 3am (midnight in BC) to catch your flight. After pushing myself through the first 15 minutes I came across some guys fishing and took advantage of the opportunity to stop and meet some locals and practice my spanish.

They were resort workers on some off time. Although Cayo coco is a beautiful little island populated by hotels, there are no accommodations for staff so each morning and night they are bussed in from nearby towns. This adds a minimum of 2.5hrs to everyones’ day and for some is more like 5. Private cars are uncommon in cuba . If you do own a car it is expected that you pick up hitchhikers who are usually just trying to get home from work or visiting family.

Thankful for the chat break I headed back to the hotel and the beach. There’s nothing quite like a beach and no bicycle for a clean break from “training” and I relaxed into being on holiday. 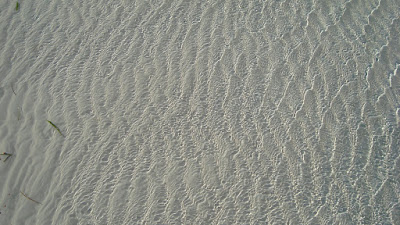 The next morning we had rented a car (not cheap in Cuba) and were headed inland to visit my friends. I had my first driving experience in Cuba. First along the almost hour long causeway off the island and then through farm fields and finally winding through streets full of bicycles, pedestrians, bike taxis, tractors, stray animals and 1950’s vehicles (many of the vehicles in Cuba entered the country before the Cuban revolution was won in 59).

Everyone was there awaiting our arrival and the rest of the day was spent catching up and visiting the neighbours and extended family. My parents headed back to the beach the next day, but I had way to much catching up to do …and it was Rosa’s (my host mother) birthday. Rosa knows everyone in town and we spent the morning visiting, I’m pretty certain, half of the town. 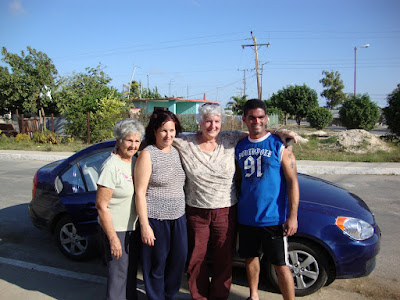 Anna, rosa. mom and Ahmel with our rental 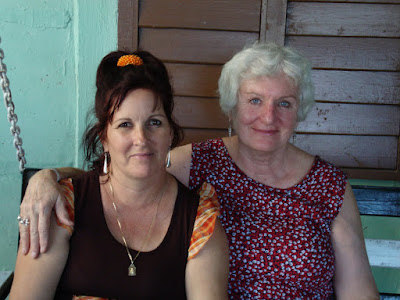 While Ernesto (my host father) and Ahmel (host brother) got the outdoor oven going for the pork roast; a neighbour came over and painted our nails. There are lots of home businesses like this where you pay in cuban pesos something equivalent to less than a dollar. Right now cuba has two currencies. 100 CAD gives you 80 convertible pesos, but about 2000 cuban pesos. Tourists are expected to pay in convertible pesos whereas Cubans can buy a lot of things in Cuban pesos. There are many items they do have to pay convertible pesos for (soap, shampoo, electronics, appliances etc) so when you earn about 20-25 conv pesos a month these items can be hard to come by. Raul Castro plans to remove the ration card system as well as the double currency system this year which we’ll have to wait and see whether it will be positive or not for the Cuban people. 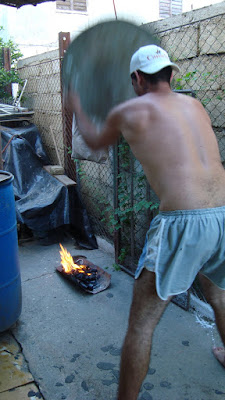 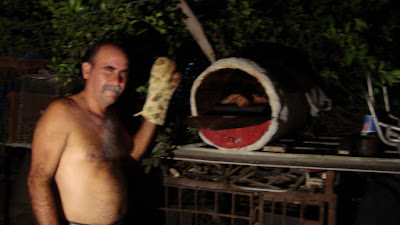 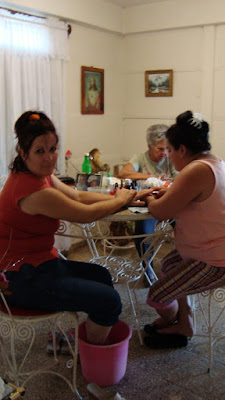 Rosa gets her nails and toes painted

Back to the birthday though. The guys prepared a great pork roast with congrise (rice and beans) and Yuca, Cuba Libres and Bucaneros. We also had two cakes, one made with sugar cane juice (typical) and another with Guava. Everything was delicious and the company great. 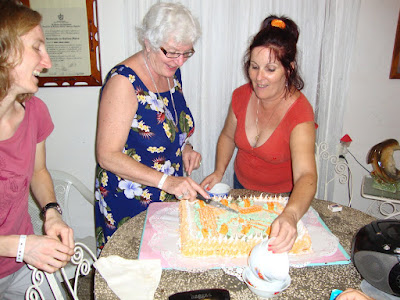 mom and Rosa both celebrate their birthdays

A week is way too little time to visit. After two nights I felt like I was just starting to get into being back in Pina and we were off to Trinidad with Marisol and Rosa. Trinidad is a cool old city on the ocean and near the mountains. Apparently it’s where a lot of the cyclists train, although with the ratio of potholes to smooth pavement I think they might need mtn bikes. 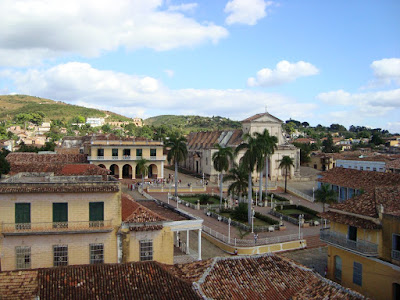 After an amazing pizza that could have been in Italy my dad maneuvered us over the rough roads and the topa de collantes. We stopped midway for a driving break and to pick some Guavas before Marisol took us to an amazing hidden waterfall. Having lived in this area, where she was a teacher she new a local family. We parked on the road and walked through their cow pasture to their home. The family invited us to pass through their home. From there we went through their small banana plantation, more animal pasture and then, in front of us, surrounded by lush grass and trees was a lovely waterfall draining into a small pool.

It didn’t take long before I was down to my skinnies and in the water. The cubans of course thought I was crazy swimming in such cold water, but it held nothing on the North atlantic. 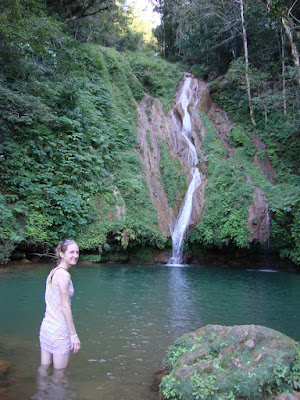 We dropped Marisol off at her home in Santa Clara. A modest 2 room apartment which she has worked hard to furnish with a fridge, tv and vcr. 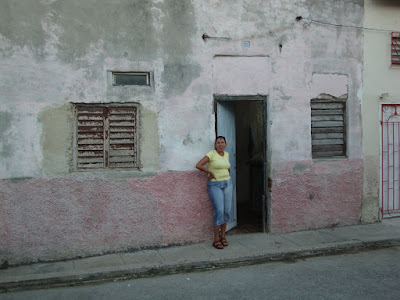 We got back to Pina late and Ernesto convinced us not to head back to Cayo until the morning. A good thing too as, remember those horrid roads I mentioned; well when we woke up the car had a flat tire. In Cuba, mornings begin with a super sweet espresso. Espresso is poured into a thermos with a ton of sugar and divvied up amongst whoever is there. Workers walk the streets yelling Pandero and from them you get your fresh bread. So with a lot of sugar and a little coffee Dad and Ernesto put on the spare tire and then Ahmel took Dad to get the other tire repaired.

We said our farewells with promises to visit again, and next time Keith is mandatory! I’d love to cross the country by bike, so maybe this and going on his vacation time (hot time) is the key.

The next 3 days were to be spent at the resort. After working fulltime while writing a book my mom was in serious need of some real down time. I was a little worried at the prospect of being sedentary so long, 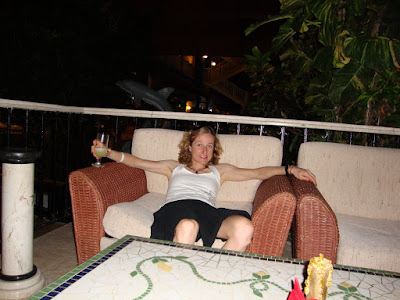 but the time past way too quickly with a snorkelling trip, kayaking, tennis (if you can call it that when you don’t actually make contact with the ball that often) and for my mom’s 60th birthday paraglyding. 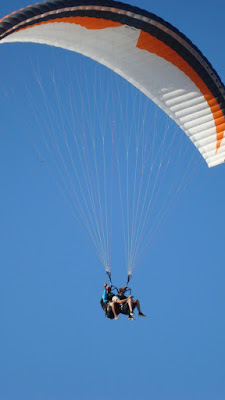 Everything was amazing and it was so nice to hang out with my family when I didn’t have a race or tough training days to log.