Yes I am still just a little excited 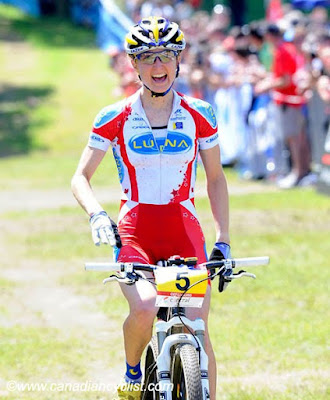 Wow. Now that was a good day! (check out more Photos video interviews and coverage by Rob Jones at Canadiancyclist.com)

After two weeks at home, some gardening and fun rides with Keith I felt recharged and ready to race. I felt like I could push the pedals hard and that mentally I had more desire for racing. I carried this good energy with me to Offenburg.

One day out from racing the sun came out and the course went from slick to perfect by race day. Everyone was visibly and audibly cheered by the good conditions. We also lucked out with our hotel (Edy's) having an amazing restaurant and we treated ourselves to gourmet food each evening.

The town and race in Offenburg is definitely one of my favourites. The countryside is beautiful and the course fun and twisty. I went into the racing hoping to grab the lead before the first single track, but a rider veering into me right off the start altered that plan. Instead it was Georgia who took the lead and quickly established a strong tempo. I settled into my familiar game of catch up working my way through the field until I had reached Georgia by the second descent. Georgia and I then rode together for about 2 laps. There were a lot of chasers behind us though and my coach Dan was invaluable on course giving us splits. 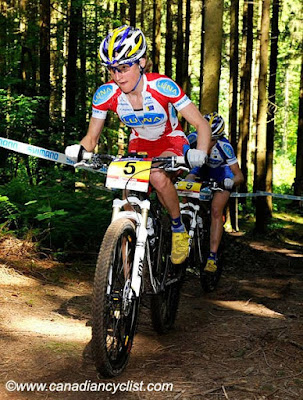 By 3rd lap it was time to go so I dug in for the climbing legs. For the next 3 laps the gap between Georgia and I was anywhere from 10 to 28 seconds with Marie Helene and Ester Suss chasing hard. Everything went perfectly for me though. My bike worked well, I was smooth in the woods and aggressive everywhere I needed to be attacking hills and descents. It felt so great to be riding at the front, and motivating to have Georgia right there with me. Of my 3 world cup wins I think this was the hardest earned. With such a tight field I could never relax.

Coming into the finish was pretty emotional. I knew my parents and Keith would be watching on freecaster and my team thrilled with Georgia and I pulling off the 1,2 at a world cup. (Katerina had decided to sit out this round, but I'm sure she would have been up there too.) My icing on the cake was learning I would also be taking over the World cup overall title and jersey. 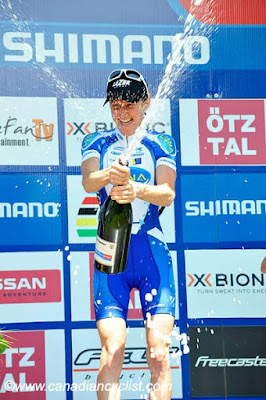 So for Luna it was 1,2, top team and World cup leader. Pretty sweet for less than a week in Europe! I don't know how many liters of Champagne and beer we won, but it was a lot! The spectators were amazing and so loud all race. Thank you! 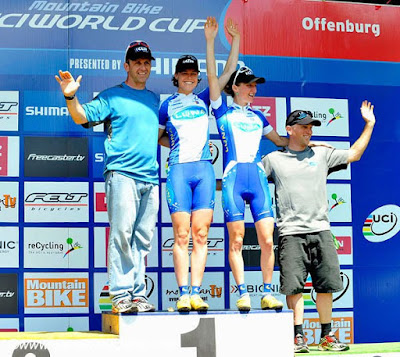 Waldek, Georgia, Me and Chris. The Luna team was smooth operating perfection this weekend. Part of the top team was my coach Dan, who's feedback on course was invaluable.

We capped off the day with some champagne, lots of toasts and great food. Offenburg was the first race that we start collecting Nation points for positions in London 2012. With my win and Marie-Helene Premont's fourth Canada now leads the way for the women.

Emily Batty had a rough day, flatting before a drop, crashing as a result and breaking a wheel. She was able to recover and keep racing, but it made for a tough Day. Amanda Sin also had a great day finishing 29th. On the men's side Kabush finished a solid 15th out of 200 finishers and Derek Zandstra overcame the heat to hold onto 66th. thanks for the sweet lines Derek!

Anonymous said…
Way to go Kika!! So great to see a sweet girl from back home doing so well.
Angela
9:04 AM