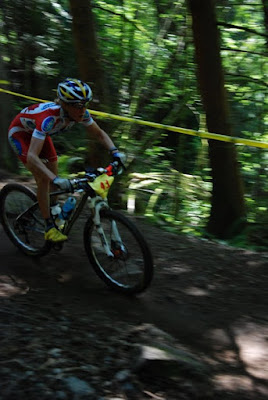 The Test of Metal in Squamish, BC is always one of my favourite races. The race sells out on January 1st in about 20 minutes, but luckily they still let elite riders in on race day. This year over 1100 racers ranging in age from the teens to the seventies signed up.

This was the 15th anniversary of the race and festival weekend and all 15 past male race winners were brought back as well as many of the female past winners. The weather was perfect and the course only slightly slower than the previous year due to weeks of rain leading up to the event and i had been talking smack to a bunch of guys leading up to the race so the competition was going to be fun.

The great thing about the Test is the people. This includes the fans out lining the streets with sprinklers, out on the trails, often only semi-clad and the people racing alongside you. The whole community gets into the race and make it loud and vibrant. Afterwards there’s a big BBQ and lots of local parties. This year we were hosted by Squamish Locals Dwayne, Renee and Livy who treated us to an amazing weekend and lots of scrumptious food.

The Race: 1000 person mass start. Wahooo! I was able to hang onto the front group of 13 men cresting the paved climb and claim my first of 10 women’s primes. I was a little nervous that it would come to a sprint with Wendy, Sandra, Catherine or Jean ann as a large pack stayed together most of the climb, but lucky for me it broke up right before the last pitch and I didn’t have to humiliate myself. On the men’s side Kris Sneddon out raced Kabush for the first prime, Geoff went on to grab the other 9 and solo in with a new course record of 2hrs and 29 minutes.

I was super happy with how I was able to ride the race. I was surrounded by elite men for most of the race and ended up 19th overall with a time just under 2:52. I didn’t match my record from the previous year, but definitely felt the competition depth and racing was just as good or faster this year.

My housemates Matt and Catherine pulled off great rides despite mechanicals finishing 5th and 3rd respectively, while my housemates of the weekend Dwayne and Carter raced with me for 2hrs before riding off to sub 2.50 races. Renee got the awesome claim of beating her sister by a couple hours. Yeah that’s right! And Livy took her first steps. And yes Drew Mckenzie, you beat me fare and square. it's on for next year!

Thanks Keith and Christina for the bottles and weathering the heat and feed-zone for me!