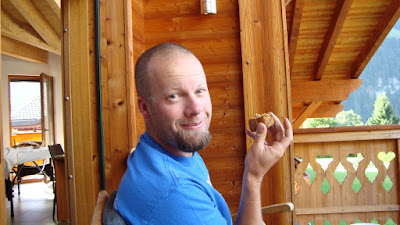 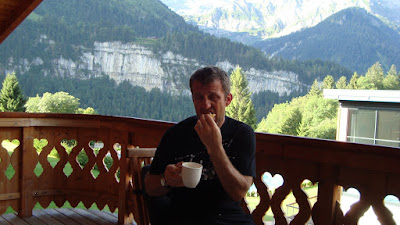 After Nationals I got a day with Keith and then i was off to Europe again. I was excited to be hitting the World Cup circuit, particularly after being able to confirm good form at Nationals.
My brother Geoff was traveling with the national team as an assistant coach so I was also looking forward to some hang time with him and the other Canadians. Travel was smooth and our entourage of two vans and 2 cars, all fully load, made our way from Zurich to Champery.

Champery is in South east Switzerland in the Alps. It is one of the most beautiful places I've been too. The view from our hotel seemed out of a painting or fantasy movie. The weather was amazing, actually a bit hot, and by Wednesday we were out for our first look at the course. 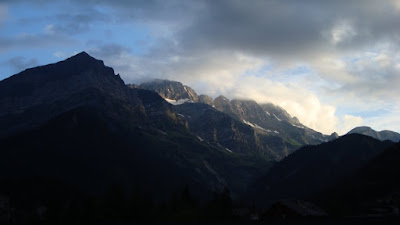 yes this is the view from my hotel, unreal.

Champery is hosting Worlds next year so I was eager to spend some time on the course and find out how to be most efficient on it. This year they reduced the length of the long climb, also removing some rough descending, but added another climb and descent section. It had a good size drop with a gap in it and some tricky corner chutes into it. First time through I slipped out on the corners and went down hard.

Unfortunately hard crashes have a habit of making you timid and I was never able to master those corners. I eyed the drop eagerly but just wasn't feeling technically sharp enough to risk it. My but was pretty darn tender under load. Thursday brought a big change in the weather with on off hard thunder showers for 24hrs. The course turned ugly. Thick rutted mud and slickness. I was okay with that. I'd prefer dry, but I kinda like it slick too. I had embraced the weather, but I guess not the amount of running that would ensue.

The day before the race I was the most nervous I had ever been for a race..and it was still 1 day out. Wearing the number 1 plate I was feeling some internal pressure, but a good chat with my bro helped me relax and look forward to racing.

Race morning dawned sunny and bright and I wasn't nervous. I think the highlight of the day was being Surprised by Kiara Bisaro showing up with husband Sylvain and their gorgeous daughter Georgia. I was feeling good, maybe not my typical confident, eager self, but excited to race.

From the gun things were good. I maintained my position to the left hander over the bridge and then onto the dirt. This is when things started going backwards however. Once on the soft dirt girls started charging by me. Into the disgusting thick wood chips trails even more went by. I entered the first climb already 1 minute back.

Being used to this type of situation I floored it on the climb and picked a lot of girls off both there and on the first rough rocky descent. Thanks for the lines Geoff! Through the start finish i was up to 13th, but still 1 minute back. I was on the hunt though and had lots of girls in my sights.... and then the sucky moment when you go to shift in a mucky, dirty race and your chain gets lodged between your frame and cranks. Off the bike and reefing on it as the traffic streams by. It doesn't budge. The chain has looped back on itself about 3 times and is really wedged. I start running, but then realize how far I'll have to run and try to relax and figure this thing out. I get my chain out and am back at the chase, although a little deflated.

I run the chutes and take the chicken line, more deflation. Normally I'm pretty good at taking chances, but still tender from day one, today wasn't the day. The rest of the course was pretty decent for me and I slowly made up spots and time. Slowly. When I realized I was trying to stay on my bike way longer than other girls and that they could run by me and gap me I had to change my tactic and start running.

It was a frustrating race. I'd make up time in one section and then be behind someone and lose whatever seconds i had gained, or get my head up my but feeling bad about my race and lose time. At least I felt technically sharp in most sections, and always reeled people in on the climbs. As consolation I could see my team mates riding well up ahead when the course looped back on itself.

I worked my way back to about 14th and then burped my tire on some rocks. Being only a couple minutes from the tech zone I rode it in, changed my wheel and headed back out for the last lap. Thanks guys. I went hard to the finish, but it was one of those days when you suffer a lot, but don't go a speed that justifies the look of discomfort on your face. 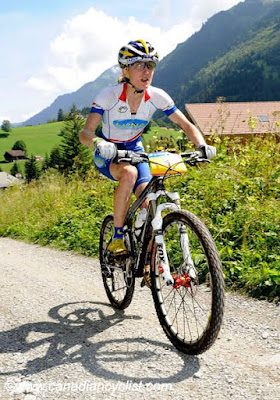 I finished 16th, 7min 49 seconds of the win. Ouch. It's been about 3 years since I've been that far back. I'm a bit thrown off by the race, even without mechanicals I wouldn't have had my best day, but I'm trying not to beat myself up over it. Just a race after all. Saturday is another race and another chance to ride my best.

The World cup overall is still within reach. I'm now 3rd overall at 56 points back. That and another world cup podium will be my motivation.
Thanks everyone for your support and congrats to my team mate Katerina who made the podium in 5th, Georgia who placed 11th and all the Canadians that had great rides from our juniour men and women to Clair Buchar's fourth consecutive 7th in DH, to Geoff (21) and Derek (37) in Elite, and MHP (13), Emily (23), Amanda (28), Sandra (41).