A weekend of Cross in the centre of the Universe

This year after a two year hiatus from cyclocross (my previous experience being 4 races), Keith and I decided that I should organize a cyclocross series in the interior of BC so we could do some cross racing, but not have to do a ton of travelling every weekend.


The series was a huge success introducing lots of people to this new discipline and giving Keith and I the cross bug.  Then air Canada emails me info on a seat sale to Toronto.  Cyclocross nationals are there, I've got lots of family there, I have been racing cross and I figure a trip to the Big city could be fun.


Hosting my race the weekend before I was pretty busy and stressed out and looked forward to a trip to TO for a fun race with Keith.  Racing cross is a nice mental change for me, I don't have to put the same mental and emotional energy into it.  Race morning I started getting super grumpy about things that weren't a big deal though.  Ahhhh, so I guess I do care about my result.  The fact that I was dismounting way too far in advance of barriers and am inexperienced at cross was making me nervous.  I got a grip though and took to the start line.


I had a great start, but then relaxed a little thinking I was safe in the train.  Then came the realization that in cross you never rest and I've allowed riders to gap me from the leaders.  I spend the rest of the race chasing.  With 1\2 a lap to go I see 3rd and 4th place unravelling a bit and decide I can make the podium.  I dig hard for my fastest lap of the race and quickly catch 4th.  Then in the last corner I'm able to sneak past Pepper Harleton to claim bronze.
Wendy Simms and Katy Curtis dominated the day with Wendy winning the sprint for her 4th national championship. 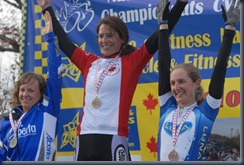 But racing isn't over now.  Sunday is Nationals revenge, the day where everyone who's nationals doesn't go as well as hoped gets to give it another chance.  For Keith this was the case and he moved up 10 positions!  I was happy with the way my race finished, but I wanted the chance to start harder and see if I could win.

After yesterday's practice I was much smoother at the barriers.  The course designers had also dug trenches at the base of climbs to try to force people to dismount.  It didn't work for the earlier start groups and so 10 minutes before the women's race they dug a deeper wider trench.  I tried to ride it unsuccessfully on lap one and was forced into an unplanned slow dismount.  The girls around me ran past and attacked the crest getting a gap.  At the crest of the painful run up I dug deep to bridge up and by the end of the lap had successfully made contact. At the crest of the run up the next lap I attacked again and got a gap over 2nd that I was able to hold till the end. Natasha Elliot never let me ease off the pace though.  After a mechanical the previous day she showed she was riding strong.  The run up definitely made an already tough physical course harder. Unfortunately Wendy wasn't able to stick around for Day 2 of the fun as she has a 1yr old to go home too. So it was me in 1st, Natasha 2nd and Pepper Harleton in 3rd just ahead of Katy Curtis.

After a fun weekend of racing, visiting family and sightseeing I think we may add cross nationals in toronto to next year's schedule as well!