- January 19, 2011
Keith and I took off last Friday for Rossland, BC to revisit the Ram's Head Inn and Granite Mtn. On our way we looked for new ski areas to explore and found a great one right on the route. McCullough Nordic ski trails, located near Big White ski resort just outside Kelowna offered us perfectly groomed and blessedly flat(ish) skating trails. We had some of the weirdest snow we had ever skied though with new rain, and a mix of sun and shade. We flew up the climbs on the shady side only to be almost thrown from our skis as they stopped on the descent and our bodies were still in motion. When the snow suction would increase dramatically was a bit unpredictable, but there were fast enough sections between to make it a nice ski and enjoying a picnic in the snowy sunshine really tops off a good winter day.

After a Pizza break at The twisted tomato in Greenwood we traversed through dense fog at 35km/hr over the Blueberry Paulson and arrived to the cozy ambiance of the Ram's Head inn. The next morning we awoke to more sunshine and a delicious warm breakfast to fuel us for a day on the slopes.

Yesterday's rain and warm temperatures suggested icy skiing so we left the face of the mountain and went directly for the backside. We made the right call as the snow was amazing and got better as the day warmed up. We spent most of the day in the trees, both trying to get some good ski legs and experience. It was probably the best day of downhill I've had. Last run we decided to see if the face of the Mtn had softened and i wanted to see if the bowl was any less steep and intimidating than I remembered. It was, but it was still Really Steep and really icy. I made my way down with memories of skiing in NB on my mind, corning when the ice allowed you to gain an edge.

Italian Dinner a Gabriella's was delicious and allowed us to plan our next adventure. A snowshoe up to mt Lepsoe, the first of Rossland's infamous Seven Summits trail (http://www.rosslandtrails.ca/cms/SEVEN-SUMMITS-TRAIL.7.0.html). We awoke to very wet and heavy snow, but were still game and as we climbed to the Nancy Green summit the snow depth increased and we had great snowshoe conditions. I definitely gained an appreciation for the workload of snowshoes as we broke trail to over 2000m (from about 1500m, but that was enough!). Now we are definitely thinking of acquiring some back country gear. 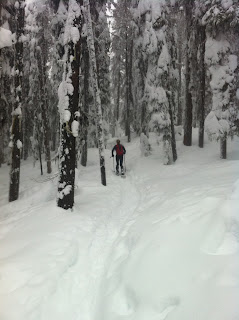 Back home with a stop in Rock creek, a tiny town, but equipped with its own micro coffee roaster.  Now to unpack and repack for a cycling camp in Victoria!!