- March 11, 2011
Phew, just finished up another tough day on the Skis.  Today was the 30km race at Masters Worlds.  I went in hoping to be faster than I was in the 15km and try to catch some of those 40+ gals, but it just wasn’t going to happen today.  I was able to clinch another title in my age group though, didn't fall off the start, and luckily have several more years to improve before I have to race the uber fast gals! 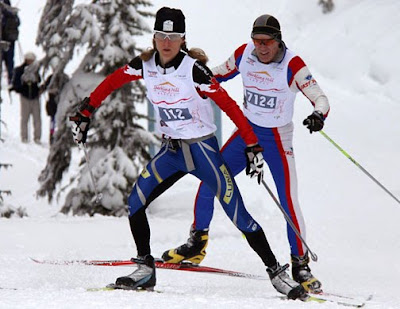 Thanks To julie Melanson for the photo!

Today’s race was 1h35.07 for me, perfect prep for the mtb.  My group started behind all the other female categories and all the men doing less than 45km so there were lots of people out on the trails. Sarah Purslow of Canada took second and Sara Calegari of Italy third.  Big Shout out to Nikki Kassel who drilled it to win the 35+ in 1:28.18.  As per usual both 2x Olympic skiers Laura Mcabbe and Lesle Hall (nee Thompson) were ridiculously fast with a 1:22:51 and 1:26:23. I’ll have to look up who won the men's 45km, because I have never been passed by anyone so fast and it took over 8km for 2nd place in the men’s to catch me!  He was on fire.

Congrats to Peter Findlay of Kamloops who took 5th in the men's 45km!  I thought you said you were tired?