- May 02, 2011
From South Africa I went solo to Arizona.  I stayed in Tempe for 2 nights until Luna mechanic Chris joined up with me.  In Tempe the friendly guys at Cactus cycle pointed me to some super fun trails on South Mountain and I did my best to not go too hard on the punchy trails as i recovered from jet lag and adapted to the really warm weather.  I tried out my Camelbak racebak with ice in it and it was awesome to help keep me cool out in the desert.

On Thursday Chris and I headed up to Prescott to pre-ride the 25mile loop of the Whiskey off Road race that I would be doing that weekend.  Chris doesn’t get to mountain bike with us all that much, typically taking care of our bikes, but that boy has skills and showed me how to rail on the loose San Luis Obisbo type descents. 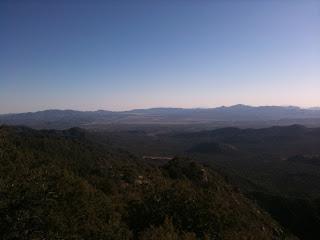 The view from the top (somewhere around 2000m is Prieta overlook)

After leaving cool scenery in Tempe and going through some uninspiring areas of Arizona for riding I was relieved when we arrived in Prescott (pronounced Preskitt).   The trails were fun and fast and there was lots of single track on the 25  mile loop.   The 50 mile loops adds a 12 mile out and back fire road descent one way, 12 mile climb the other.

Some things I quickly learned about Prescott was that it was at altitude, just over 1600m.  This made it both substantially cooler than Phoenix and a little more painful to race at.  The town loves mountain biking and has an insane amount of great coffee shops and restaurants, seemingly way too many to be supported by the population but they are all hoping.  I’m sure the 1500 racers helped.

The vibe was great.  Mtn bike enthusiasts galore and curious citizens and passers by.  I even met a family from Kamloops!  Chris and I teamed up with Peter Glassford to do some restaurant and coffee sampling so I was well fuelled and caffeinated come race day. 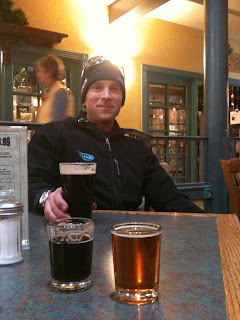 Chris and I sample the Prescott Brewing company's Porter and Amber.  No whiskey for us though.
Friday we raced a fat tire crit.   I was curious how it would go, thinking that slick tires and pavement can lead to way more pack racing and accelerations which hurt my slow twitched legs, but the climb in the course was so selective pack dynamics were not an issue and I went on to lap all but two of the field.   This had me feeling pretty good about my legs and chances for the $4000 prize purse in the 50 miler.

I definitely did not want to underestimate my competition, particularly Kelli Emmet and Pua Mata who are both experienced xc and endurance racers.  Pua being former endurance national Champ and Kelli also a great Super D racer. I imagined the sketchy fire road and loose descents putting her in her element.

Today I would get to see what endurance racing was about. I have done the Test of Metal a number of times and of course the BC Bike race, but for some reason the unknown of the Whiskey made it feel a little more intimidating.... Or was it just that 12 mile fire road out and back? The women started 10 minutes behind the men, I think unfortunately, as it would have been nice to have a faster rolling pack on the pavement and more carrots to help me dig for speed early on in the race.

Having laid the smack down in the crit, no one really felt the need to help pull on the pavement, fair enough, but Pua was a good sport and helped share the load and was rewarded with good karma.

Once the climbing got steeper I decided to go and Kelli and Pua gave chase. We entered the woods in that order. I was able to sneak away, but never by much. The numerous step ups on the climbs were quite challenging at race pace and I have to admit to not feeling super sharp mentally or technically.

We were treated to some great descents though and I started finding my mojo and reeling in the men. The fire road descent was way more entertaining than I had expected. After I learned to slow down for the corners I was much faster too. My triceps were tired from tucking between turns when after 20-30 minutes I reached the turn around in skull valley. I could see that Kelli was disturbingly close and Pua not far behind her, but I guess I was too confident in my climbing and had settled into a pace that would prove to be too slow. The climb was long, much longer than expected. I think the whole thing took about 1hr 10min.

It was such a great group of women racing.  I think i got a "go girl" from every women out there. The guys around me must have been amused at how diffently women interact in racing.

About 40-50 minutes in I looked back and saw Kelli had closed on me and internalized a big "oh shit" before ramping up the pace, hoping she had already used up her pace to get to me. I was able to gap her, but was riding hard and scared. The top of the climb took way too long to reach and I felt exhausted.  The descent rejuvenated me and I felt good punching the fire roads and climbs in between.

I thought I strung together a pretty good descent, particularly the rocky sections and was hoping it was enough to hold off Kelli. When I hit the pavement I wasn't sure if it was the light shining through the trees or whether I really was seeing stars. Just 10 minutes of paved descent to the finish line. I went into full tuck, hardest gear i could turn, gut and legs protesting and spun my legs as best I could with my police escort guiding the way. Several minutes in though there was another police moto flying by and " You've got to be kidding me", several minutes from the finish and running on empty Pua was powering by me. I had lived the last hour in fear, riding in urgency to not be brought in before the finish after such a long race and here it was happening and not even by the rider I thought I was riding from.  And I had nothing. The last climb was intensely painful physically and emotionally and Pua found a minute on me before the finish. It was an extremely hard end to the day, but as always happens from this kind of ending I get super mentally charged to kick some serious but at my next race.

Pua claimed the victory demolishing the old course record with her 3:30 and establishing herself as a force to be reckoned with. Although feeling sorry for myself, I was pretty pumped for her win and was consoled by the knowledge we were pretty damn fast among the men too. Kelli put in a solid ride trailing me by only 30 seconds at the finish.

In a town like Prescott you can't stay down for long. Even though I was disappointed with my ride, the party kept rockin, people were smiling and despite a tough day it was undeniable that life is pretty darn good.

Thanks to the town of Prescott for supporting such a great event, I'll be sure to spread the word, to chris for all the bike support and Peter for the ride and dining.