- July 03, 2011
You realize how big Canada is when you are talking about growing up pretty close to Mont Sainte Anne, only a 7hr car drive away.  But the trails feel like the trails I learned to ride my bike on as a teenager.  Challenging single track through dense forest, exposed roots and rocks and when it rains, mud and lots of it.  To me the trails in MSA, Quebec are mountain biking.  The course there has always allowed me to excel from Nationals in 2004 until yesterday, my 34th World cup (incl championships) event.  Wow, how have I suddenly become a veteran having only started doing the WC series in 2007?
No matter, I am still loving it and the people that surround me at these events.  Over the years the locals have come to embrace me as a favourite alongside local Marie-Helene.  I even had a french woman yell out during my race “we are proud of you Catharine.”  That is why racing in your home country is so special.  To be able to make those that share a connection with you proud.  It’s what makes the Olympics special and inspires greatness and gives meaning to what I do. 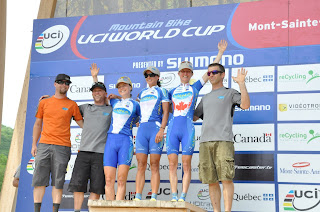 So yes, with my mom, dad, aunt, uncle, husband, brother and sister in law all out there cheering I was able to claim my 5th World cup win.
The race got off to a worrisome start as traffic ground to a stand still in the woods before the first climb.  What should have been the fastest line was completely stopped and women went streaming by me on alternate lines.  Up the first climb I was somewhere in the twenties and then got to experience what the women with less favourable start positions always see the walking lines in the first single track.  I swear women are way more aggressive when running with their bikes than when they’re on them.  Luckily they’re also creatures of habit and tend to follow each other’s line so I was able to take a couple alternate line options to try to regain the top 10.
By the Beatrice (the sketchy rock chute descent) I was closer to this goal and kept working my way forward.  The course zig zag past itself a lot and I saw the Georgia and Katerina had stellar starts and were leading in the top 5.
Through the start finish heading onto lap 2 I was able to grab the tail end of the top 6 all riding together.  I picked off a couple to better position for the steep climb and then set my hardest pace on the climb and moved into the lead with Georgia and Julie Bresset following me into the single track.  Julie used an alternate line to get ahead of Georgia and I lead into the Beatrice.  Down the descent, up a switch backing climb and single track and then down a fast, but mucky switch backing descent I was able to put 11 seconds in to Julie who had also opened on Georgia.  From there i had to keep on the charge.
On the right side Julie brought in a couple seconds on me, but I had a bit more climbing speed on the day.  Julie crashed on the Beatrice that lap and the gap opened to over 40 seconds. Georgia also had some bad luck crashing near the Beatrice and damaging a wheel.
For me the rest of the race was just a charge to stay ahead and stay focused even though it seemed like all sorts of stuff was happening in the race behind me.  Irina overtook Julie for 2nd and Katerina finished 4th after getting  up to 3rd before Bresset clawed her back.  Unfortunately Georgia, who had amazing legs, lost a lot of time after flatting.  Still Luna walked away as top team once again and 2 podiums.
It was a phenomenal day for Canadian women, taking 1st, 5th (Marie-Helene Premont and 7th Emily Batty, not to mention a host of ladies from 27th to 41st.
Kabush later went on to continue the good rides with a 7th in the men’s race and Lauren Rosser our DH World Champ won the women’s xc followed by her Canadian team mates.