- November 06, 2011
Yesterday I got to try racing the infamous Iceman Cometh, although this year it was renamed “niceman”.  Iceman is a 30-mile point-to-point race in Traverse City, Michigan.  North, even by my Canadian Standards being up near Sault Sainte Marie, Ontario. The race has been happening for over 20 years with participation growing to 4700 riders.  Some years have seen racers barging through 1 foot of snow, but this year the weather was fantastic and the course fast.
It has been 2 months to the day since my win at World Championships and my first xco race since then.  Friday Waldek and I got out to pre-ride the 50km course.  It was going to be fast, mostly sandy double track with some fast single track mixed in.  The climbs were very short and punchy.  It’ the kind of course that is easy to ride, but can suck your legs in a race if you go out to hard or do too much work at the front.
I mistakenly figured that the women’s race might be boring for the first hour with lots of cat and mouse and nobody wanting to work, but it was much, much faster than expected.  Kelli Emmett set the early pace and then Chloe Forsman and myself took over.  About 10 miles in Chloe was leading into a corner followed by Kelli, myself and Heather…. and still an entire women’s pack when Kelli went down in a corner into a climb taking me out and stopping the rest of the pack.  Chloe attacked up the climb and Kelli and I ran to get up the hill and back on our bikes while Heather, staying upright behind us was able to ride.  I lead the chase and had to bury myself to catch Chloe who by then had a solid gap.  The crash, attack, bridge allowed the top four of us to separate from the group
The first hour of the race was harder for me than I had hoped, as I knew I would need my legs in the last 7km, but I was nervous to not be at the front in case another rider let a gap form in the singletrack.   (Still learning to be patient and trust other’s speed!) My lack of any speed work training  in the last 2 months was being felt, but I was having a lot of fun being in a 4 woman pack railing past the elite men that started 30 seconds in front of us. 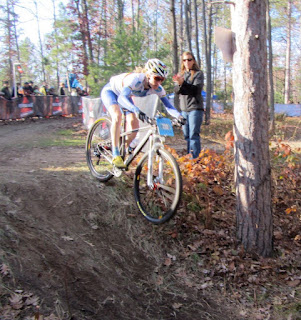 With 8km to go there was going to be a long sequence of popper climbs and I knew all the girls would have their attack points, but again I was nervous not to be leading because the passing lines were quite sandy … so I sat at the front for way too long.  Being World Champ does not make you superhuman and my legs eventually succumbed to the attacks from behind after a solid 1hr 30 of racing.  It was at this point I noticed Kelli was no longer with us.  Chloe got off the front while Heather was content to let me do the chasing. My chase was gone though so I flicked her through to the lead, a little too late  for me though as she attacked and eventually bridged up to Chloe, taking the win.  Chloe finished a well-deserved 2nd having done a lot of the pace setting in the race. I came in for 3rd and the final podium spot to some pretty amazing and loud cheers from the oodles of fans.  Thanks Michigan, It was fun!