Warning: Blog entries are my way of working through races, brevity not guaranteed.

My teammate Katerina Nash rode an amazing race this weekend.  She demonstrated grit, fluidity on the bike and took risks for the win.  The win seemed assured for her until crashes the final lap.  Such is bike racing.  Nothing is ever sure until you cross that line. 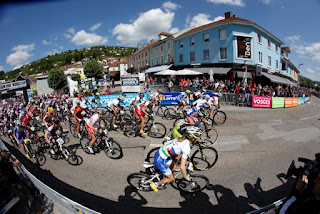 The race got off to a good start.  I learned from the week before and chose my passing places more wisely and was in a decent position coming through the start finish.  We wound our way through the town of La Bresse towards a climb of several minutes, pretty rare on a world cup course these days.  The climb switch backed its way up the mtn, the last minute traversing baby head rocks that required good timing and smooth power delivery to not slip up. 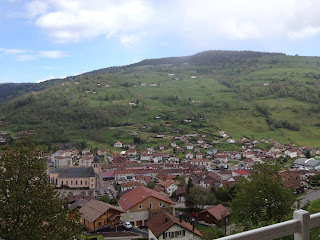 The course crisscrossed this mountain

I found my way into 3rd before the descent, but had trouble matching the pace of Katerina and Julie. I was feeling timid on my bike and couldn’t force myself to commit and let my bike go.  Instead I tensed up and grabbed lots of brake.

I knew that if I were to have any chance of winning I would have to get myself together and go into the descents next lap with zero space between me, Katerina and Julie, so after the descent I dug deep and brought back the 17 sad seconds I had allowed to open on the second half of the course (which was a combination of rocky descents, rooty climbs and steep chutes).

“Ok” I told myself, “I’m back.  Stay with them”.  This lap was better, but still mid way though the descent I lost time on the chutes and had to bridge up again.  “Ok, this lap no messing around.  Get to the front and let leading inspire my descending”.  I got to the front and started descending better.  This was the turning point, I still wasn’t as good as them on the second half, but I was better.  And then, entering the final decent, the previous laps had caused a big wheel sucking hole to form on entry.  My wheel went in, I got squirly, but saved it with a foot out until behind me Julie also got her wheel lodged and sailed “ass over tea kettle” into me and the surrounding rocks.  We both went down, Katerina got slowed up and Gunn Rita got back into contact with us.  I got back on only to find my chain dropped.  To not risk getting it lodged in there for good I was off my bike to fix it and then chasing back into the climb, now in 4th and again about 20 seconds back with 2 laps to go. 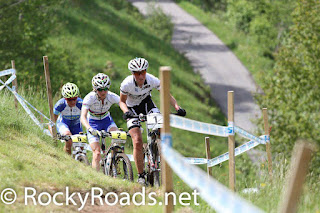 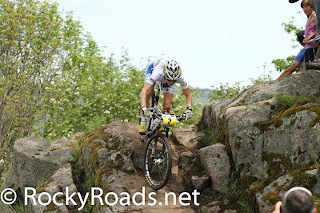 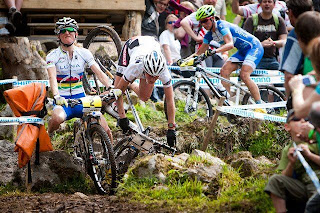 Photo: Eduardo Prieto
Since this made every newspaper in Canada it may as well make my blog.  I swear I did not drop an “F” Bomb.  thanks to all the fantastic photographers out on course capturing the moments!

Frustrating.  I could tell Julie was hurting as I made my way up to and past her into the climb.  Julie is a great fighter though and she came back to my wheel as Katerina and now Gunn Rita slowly pulled away.  I was feeling a little mentally and physically depleted, but the amazing crowds pulled me out of my self-pity…on the climbs at least.  On the descents I was still berating myself for riding so poorly.  I knew it was just a matter of switching my mindset and embracing a little lack of control, but on the day I just could not do it and it was incredibly annoying.  I pride myself in being a good descender as well as a climber and get very distracted by sucking!

Final lap and it’s the same story.  The highlight was the roar of the crowd as Julie (of France) and I raced through the top feed zone.  It rivaled the noise from team Canada on my final climb at Worlds, but this time was directed at my competition.  I knew how it inspired me back then and tried to use it to dig.  I did, but it wasn’t enough to cause separation and Julie overtook me into the descent.  From then on I just tried to hang on to 4th and was in this, successful. 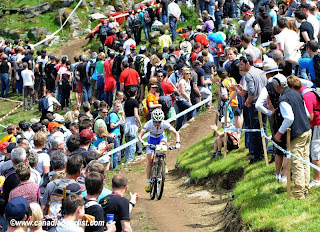 Gunn Rita over took Katerina for the win in the final minutes of racing for her 27th Career World Cup win. Katerina scored her best ever World cup placing in 2nd, Julie took 3rd in her home country, I was 4th, Maja 5th and my other LUNA team mate Georgia Gould backed up her 4th place ride last weekend with a 6th.

Emily Batty was the second ranked Canadian in 9th and Marie Helene Premont finished 21st.  Official Olympic selection will not be released until mid June after the IOC guarantees each country their spots, but Luna is looking pretty darn good!

So what happened to your Skills?

Because I will over analyze this anyhow I thought I might as well share my thoughts for those interested in reading.  Thank you to all of you that sent nice notes to help me keep things in perspective.

“Catharine you’re normally pretty competent on a bike.  What happened?”

I rode timid.  I didn’t trust my bike or myself.  I was too on the brakes and too tense.  But why?

Arriving in France Monday night, I arrived much earlier than normal for a world cup.  I did my big day on the course Wednesday and after 3 laps felt pretty solid.  It had rained and snowed and the course was slick, but I embraced it.  I liked the course.  All the terrain was natural and challenging.  It reminded me of Mont Sainte-Anne before it’s renovations.  It was natural gnarly and I liked it.

My legs were feeling heavy and tight still from the Czech race and I wanted to be fresh so the next two days were on the road.  By Saturday my legs felt good and the sun had decided it was coming for the weekend.  I headed out to do my prep and all was good until I balked at a rock face.  I got it, but wasn’t feeling confident, like I could place my bike where I wanted it, like I was the driver.

This was me on Sunday
http://www.youtube.com/watch?v=ADgREd-bybA&feature=related

Having done all my course prep in slow conditions before the course inspection and wear and tear of hundreds of training laps by other riders the course had changed and I was thrown off a bit.  The final descent was incredibly slippery and I just couldn’t commit.  I fought my bike and myself and just rode it really poorly.  I watched many around me also flailing, but others riding it like there was no issue.

I took a time-out gathered myself and moved on.  I thought it was a bad day and that when I got into the race I would just go for it.  I didn’t want to subject my legs to that climb again.  I have had pre rides where I felt off and then was able to put it together in the race, but this time that didn’t happen.

Racing mtn bikes is about fitness, technical skill, confidence and mental strength.  You need all of these.  In this case I would have been better off to do another lap or at least re-ridden the sections I was riding well to get my confidence back, instead I just thought it would come together.  That’s an arrogant presumption when you are trying to best the best in the World! Not riding well the first couple laps of the race just confirmed in my head what I had felt the day before.

The Solution?  Time on good BC trails on my Occam with my husband.  Kamloops being dry and loose, I’ll be headed to Pemberton for the Nimby Fifty and the coast for some rocks and roots!  Let the good times continue.