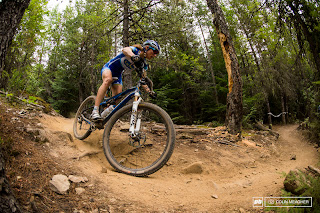 It has been years since my schedule has allowed me to make crankworxs and as many years since they have actually hosted an xc event.  Hopefully our paths will meet more in the future because riding there is a lot of fun!

Still low on racing, not to mention mtn biking miles I decided rather last minute that I was recovered enough from MSA that the Whistler Canada Cup on Wednesday would be the perfect mental and physical prep for me before Worlds in South Africa.

The cool thing about racing outside of World cups is that there is way less stress and more pure excitement for riding and racing.  I wanted to make some high quality race efforts, have fun on my bike and get excited about going fast.  This was the perfect race for it.

I feel so lucky to have developed on the Canada Cup circuit making great friendships as we all pooled together to keep costs low and fun high.  Sandra Walter, whom was my travel buddy for my first World Cup campaign year in 2007 was also my stiffest competition at Whistler.  Coming off of a silver at nationals and 16th at the MSA World cup Sandra was on great form and one of the best technical riders out there.  From the start she was pushing me to find more up the climb but I nipped into the singletrack just ahead of her, Jean ann Birkenpas and Brandi Heisterman.  Sandra and I rolled away on the first descent, her pushing me all the way.  At the base of the "pure evil climb" I had a small gap and worked to expand it.  I continued to attack every climb and be as smooth as possible on all the descents and for each dry loose corner .

My race felt great.  I was aggressive and strong and by the end was able to build a 3min+ buffer.  I felt closer to my true racer-self than I have for quite some time, just going hard, not over analyzing, not pacing, just digging for more, not relenting and having fun. Catharsis. 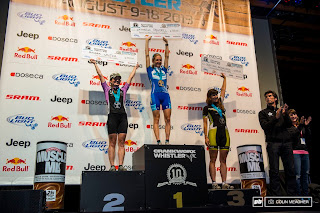 Friends forged on the Canada cup from 2004-2007 were again my travel mates and podium companions at whistler 2013, racing because we love it and because we can always learn something that will make us faster next year than we are this year.  Congrats to Sandra for 2nd place and taking the Canada Cup overall for the 2nd year and to Jean ann Birkenpas finishing 3rd.

Now it is just under a week till Sandra and I board a plane to meet up with team Canada in Pietermaritsburg South Africa for the World Championships!  Wahoo!