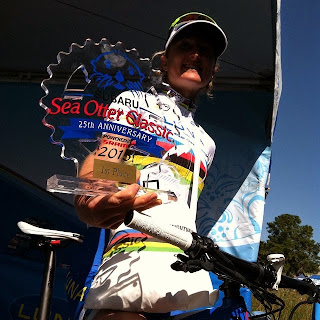 4 races down and still 2 weeks out from the first World Cup of the season! With early season high UCI point races and wearing the rainbow stripes, I knew there could be a danger of me coming out hot this season and fading towards the end.  So I have patiently (nervously;-) committed to a plan of a slower ramp into the season.  Although at the first events it was hard to come up a little short at the end of my races (2nd, 4th & 2nd at Us cups 1,2 &3), I felt good, had fun racing with my team and learned a lot about racing in groups, something my pin it from the start preferred strategy doesn’t offer:-). The importance of always having a race plan and commitment to a goal even if I’ve raced hundreds of times was also reconfirmed.  You do not show up and win without a fiery spirit and focused mind.

My persistence and learning was rewarded at US Cup 4 with my first ever Sea Otter Classic win, a race reputed for being a tactical game with large groups of racers typically sticking together for much of the race.  It was a punishing race that demanded putting it all out there in a final attack to edge away from Australia’s Rebecca Henderson.

So race phase 1 is complete with some valuable lessons learned.  No onwards and upwards to the World Cups!