- September 19, 2015
The last month has been one of the most fun of my racing career.  I love travelling for races, but so often we are in and out of these amazing areas before you can get to know and explore them.  With worlds at 1900m this year, the plan was to head over early to acclimate and enjoy training in Europe.  First stop was Livingo, Italy where we ran into some of Canada’s fastest xc skiers Devon Kershaw, Alex Harvey and Jessie Cockney.  Fun fact: Alex Harvey and I both raced mtb Worlds in Livingo in 2005. 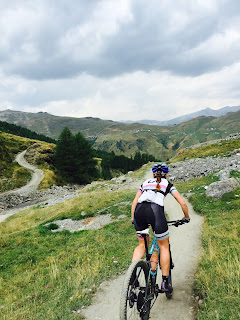 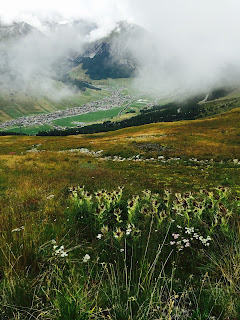 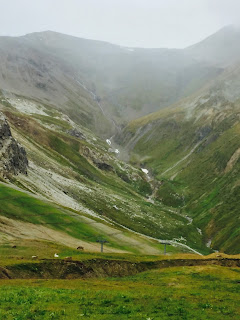 After 10 days of training with my favourite training partners; Sandra and Keith, we were off to Val di Sole, Italy for World Cup finals.  To get there we drove over famous cols like the Gavia and Tonale. The Gavia is so narrow it is handwork just to drive.

After a tough race in Windham I was feeling recovered and strong and was able to put out a good hour of racing at the front of this World Cup, but I still fell apart a little in the final 3rd of the race finishing 11th and dropping by 4 points to 4th overall in the WC series.  Worlds was still the big goal, and having experienced a big upward trend in my racing from two weeks ago and with two weeks left to prepare, I was feeling positive as I joined team Canada to head to Alpe D’huez for our final training before Worlds.
Alpe D’huez is an amazing place. At 1850m we were nestled in the mountains with spectacular views.  The best day was hitting up the epic Mega Valanche on our xc bikes.  The 1.5+ hr climb back up was totally worth chasing canucks Peter, Sandra and Alex down, but next time I’d take a big bike;)

After another epic 9hr drive with Tina Fey on Audio Book (Hilarious) and Tara at the wheel we arrived in Andorra to 34 degrees and smoking hot apartments. 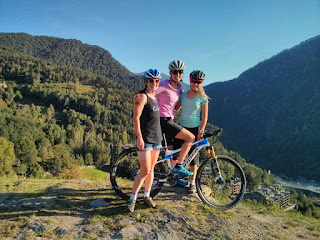 This year Canada entered 4 National champions as our relay team (Raphael Gagne Sr, Alexandre Vialle U23, Raphael Auclair Jr and myself).  Prepping and racing with that crew was a blast and after posting a strong relay time I was excited to get to the big race.

Then the skies opened up.  It poured epic rain for the jr and u23 races.  The day before my race I was wearing 4 layers on my upper body and was still cold, but I had so much fun riding the streams of water flowing the course with Sandra and Mike that I didn't mind. 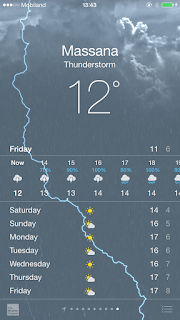 Check out this video for a taste of Vallnord  https://www.youtube.com/watch?v=eyi3gXirUN0

By race day it was blue skies and warming up but the course had gotten destroyed and was crazy difficult to climb and descend.  I had a great ride, quickly climbing to the front of the race, slipping and sliding down the traversing descent and eventually settling into an on-and-off the bike rhythm with only 2-3 wipeouts a lap ;-) With our assigned race laps based on dry weather times, our race ran way over length being nearer to 2hrs.  Although I had a good ride I was not able to hold off a charging Yana Beloima of the Ukraine on the last lap and had a sprint to the line with Gunn Rita Dahle finishing 5th. 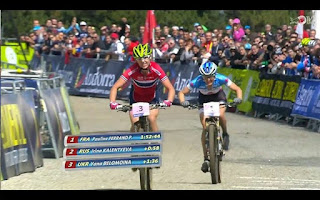 Although I would have loved to defend my World Championship title with a little more authority, after a couple difficult races it felt good to be able to go out and give it my best and be in contention for a medal.  And Wow, new Olympic selection criteria meant a top 5 qualified me for Rio!!!!!

There was nothing left to do that weekend but party with the team and that was pretty fun too!
On Monday, raced and partied out, I joined my parents for two days touring Girona and Barcelona, two of my favourite cities and places to go for cortados!

Thanks to everyone in my life that made this such a fun, full & rewarding trip! 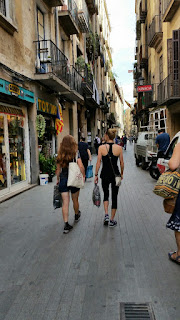