Fear, form and coming back from injury 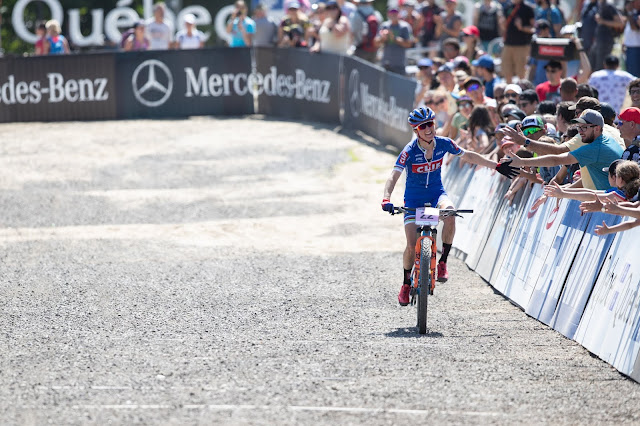 It was my comeback race, it was not glorious, but it was ok and I am back doing what I love with the people I love

Exactly 10 weeks before the Mont Sainte Anne World Cup I broke my left humerus.  It was a pretty random crash with a rock shifting under my tire as I went high speed through a small rock garden. It happened fast and I thought I would just roll out of it, but when I sat up I couldn’t move my arm.  I didn’t have a single scrape on me otherwise and had almost convinced myself I had just really hit a nerve…almost.

When I saw my x-ray my heart dropped, but I immediately started thinking of my rehab plan. The doctor seemed reluctant to dash my hopes of returning back as quickly as I did from broken collarbones, in 6 weeks, but cautioned me to think more long term. 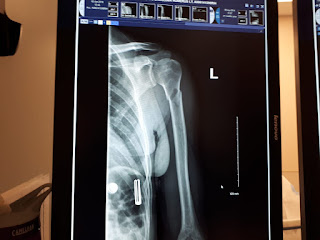 The first two weeks of an injury are the hardest.  You’re uncomfortable, restricted and having to reset some deeply desired goals.  My husband and friends were amazing and helped me rig up a trainer with a TRX hanging from the ceiling to allow me to lean forward slightly while holding my arm to my body to limit discomfort and to be able to feel like I was doing something to stay active. But the first two weeks were recovery rides which were then followed by naps and I looked forward to the day where I could actually chop my own food and do my own hair. As a soft callus formed around the fracture and I began to feel more comfortable I also learned how to adapt how I did things and feeling positive and more capable became much easier.
In 2014 when I broke my collarbone I was told that because I was “older-34” I wouldn’t heal quite as fast. 6 weeks later I was racing and at the end of the season I was both Commonwealth Games and World Champion.  I think that athletes disrupt a lot of norms. We go into injury healthy, are highly motivated to get back as soon as possible, have great support networks and I really believe that being active through injury, if it does not cause pain, does increase healing.
So, in 2018 I had a game plan, but quickly learned a complete humerus break was a slower heal than a collarbone and much harder to maintain quality training throughout. With a daily trainer ride and when it became comfortable for my arm to swing, a walk every day, the extra blood flow combined with 20 minutes of ultrasound daily (Exogen by Bioventus) I was out of the sling after 4 weeks and beginning partial weight bearing on the trainer…to contrast this I was able to weight bear on the trainer and do sub-threshold intervals on week one of a collarbone break. 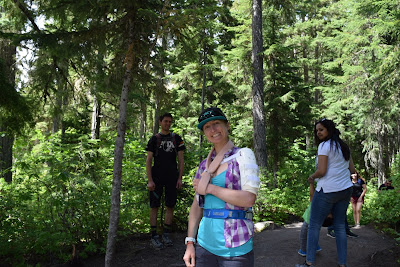 Coming off of a rest week and a race block beforehand, my fitness had plummeted.  Essentially, I had taken a month+ long off-season in the middle of the summer. But by July 8thI was back outside on a road bike and rebuilding arm and shoulder strength and my ability to ride out of the saddle.  2 weeks later I was able to start mountain biking and doing the harder intervals I needed to be able to use my upper body to brace for. I was feeling pretty good all things considered.

I had to change my goals to races later in the season and change my expectations to make sure they were solidly around process goals (What I can do) rather than outcome (results) so as not to get discouraged.  In competition you have to want the best result possible, but you also have to be realistic with what is possible. If your reality is too far off your expectations you rarely find your best, but if you can appreciate all the small gains they will eventually add up to something big and satisfying.

With form building, it was time to tackle fear.  I felt pretty confident riding, but when you have experienced the consequences of crashing and know that at 2 months the bone is still only at partial strength there can be some hesitation in the back of your mind. The trick is building back enough positive experiences that you forget about getting hurt …or at least it is not forefront in your mind.  And crashing, getting that first crash afterwards and realizing you’re not that fragile, can also help. So, at 9 weeks I was flying to Mont Sainte Anne confident I could ride and race, but also a little nervous.  I arrived a day earlier than normal to give myself more course prep time and am grateful I did as the following day had very intense thunderstorms and slick conditions.

I did my course prep with my friend Sandra and husband Keith, Riders I trusted to follow and that gave me confidence.  I chose to ride a full suspension with a dropper seat post for added confidence and stability.  I probably did some of my slowest descending ever on that track on that first lap, but this showed me how much traction, control and stability my bike offered and with each lap I got faster and my nervousness went away, until the next day….
The next day I was scheduled to do the course preview for RedBull. I wanted to get in another lap for confidence and flow before it, but the skies absolutely opened up and hammered us with rain.  Ric, my RedBull preview buddy, was nervous too.  Having never ridden the track before and on a borrowed bike due to airport baggage delays he was not stoked to check it out in the pouring rain.  I was getting nervous but I also knew I had to face those nerves because it’s MSA and mountain biking.  Conditions are constantly changing and you have to be able to roll with them.  So as soon as the rain stopped I decided to not let the conditions or nerves beat me and go have fun with Ric on course and it was great!

You can check out our preview and track chat here
https://www.redbull.com/int-en/tv/video/AP-1W6D9T5VH2111/track-talk-with-ric-and-catharine

The Short track was an eye opener to the conditioning and race ferocity I was missing relative to my competitors, but also the best way to build both back to where they needed to be.  You dream of having an amazing comeback performance, but for many of us that is not the case.  My cross-country race had both positives and negatives.  No crashes and comfort, if not full speed, on the technical sections were the good.  Being confronted with the pace and race efficiency I had lost since my last race 11 weeks earlier was the hard.  It was my comeback race, it was not glorious, but it was ok and I am back doing what I love with the people I love ahead of schedule and with heart-warming support from the fans in MSA.  From MSA I have 4 weeks to find more pace and ferocity and have my best ride possible at the World Championships and I'm pretty excited about this opportunity to be back.

Rose Grant said…
Thanks for sharing 💛 congrats again.
10:41 AM

Kika said…
Thanks Rose, I hope your rehab is going well!