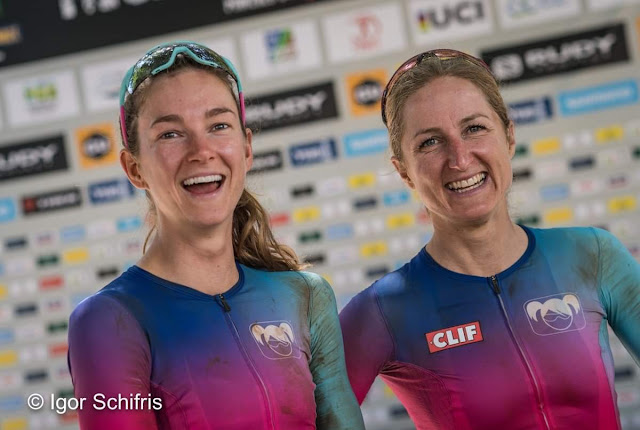 Israel is a country I think most of us come to with misconceptions of what it will be like. Without a bike race drawing me here, I doubt it would have made my list of places to explore, but I feel gratitude for the chance to have gone, lived with a lovely cycling family in a Kibbutz for several days and raced over 300km of roads and trails surrounding Acre (Akko) with a world class field of competitors.

After seeing the dusty, exhausted faces in images from last year’s epic I was not sure it was one I wanted to tackle…. but the lure of a new country, an adventure, some UCI points and only 4 days of suffering was enough to prompt me to ask Haley Smith if she would like to partner up again.  I had just beaten her to the question by a couple hours.

We arrived several days early to acclimate and I actually participated in a C1 race on day 1.  I say participated, because after one lap at the front I blew in the heat and could no longer call it racing…just trying to make it to the finish. Happily, I had a couple days to recover and acclimate to the heat and 10hr time change before the Epic began. 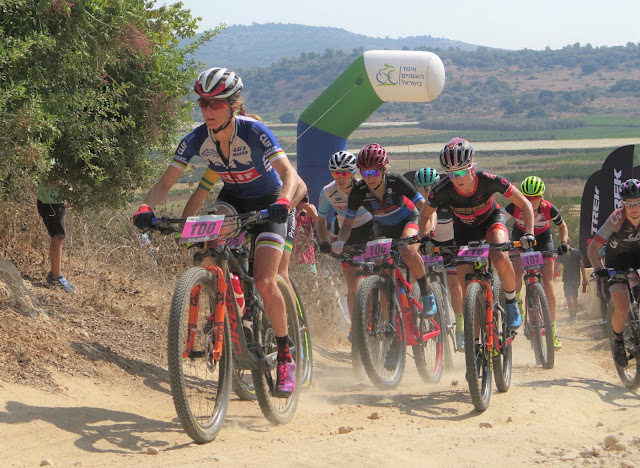 Flying into Tel Aviv, I lived with a family just south of Haifa for several days before moving to the race village further North up the coast near Acre. The Luria’s lived in a Kibbutz on the Mediterranean Sea that was surrounded by banana plantations which provided our off-road routes to the over 40km of beautifully sculpted trails on nearby Carmel mountain.

…..by the time I joined up with Haley to begin the Epic I already felt like I had had quite the trip.

The race began with a 22km mostly flat time trial that took us from the race venue through Banana plantations to the historic city of Acre on the Sea and back again.  Our plan was to trade up pulls every 20s as best we could with the terrain and our energy.  We started strong, but had some heat issues midway through and had to back off a bit and ended the stage almost 2 min off the win and 57s off the podium.  We got a little worried about the days ahead.

All 300 two-person teams lined up by 6:45 am to start the race countdown.  Lucky for us, UCI riders started at the front.  The race leaders start on the very front row and the rest of the women lined up behind the elite men. So not only was our mission to successfully navigate the mass start, but also to try to keep an eye on where the lead women were riding in the mix. 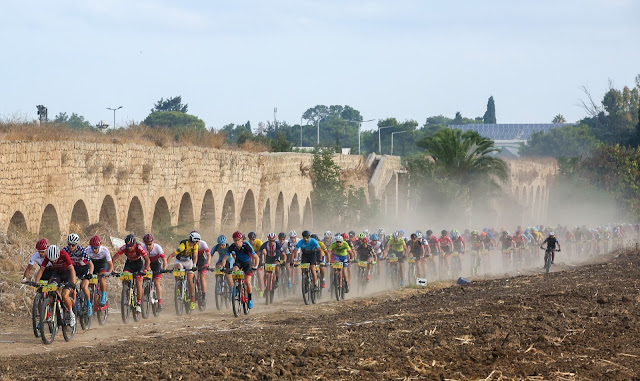 Racing into the dust and rising sun we managed to move into the women’s lead within the first 20 min of flat pack racing.  Before the first feedzone however, Chloe and Erin (the Overall (GC) leaders) had bridged back to our group. We rode together from feedzone 1 to 2 before we were able to climb away and put some space between us.

Although relentless, our day seemed to be going well and after losing so much time in the prologue I felt quite emotional that we could win the Queen stage! We had no idea how far ahead we were, but just tried to settle into our own rhythm.  As the day went by and the kilometers ticked past our legs got heavier and temperatures hotter.  We entered the last feedzone still in the lead, but without the ability to really drive the pace any longer.  The race finished with 15 km of flat windy farm roads.

With 8 km to go we looked back and saw the duo of Sophia Gomez and Rose Grant.  They were charging and quickly gobbled us up and left us in their dust.  As much as it hurt to lose so close to the finish, it was also inspiring to see how strong they looked at 90km of hot racing.  Haley and I rode into the final kilometers in second place, feeling as close to puking as we ever had at the end of a race.  Our efforts were rewarded with not only a podium on the day but by moving into 3rd in the GC.
Day 3: Stage 2. 90km. 1200m climbing.  Ride time 4hr 12min 10s

There is nothing that fires you up to win like narrowly missing the day before!  Although on paper this day looked pretty much the same as the one before, the climbing was more broken up and there was significantly more singletrack.  We successfully navigated the start again and had a good train along the roads to the trails with the top three women’s GC teams all in the same mixed pack.  The day was going well until our pack came around a blind corner under a tunnel and everyone slid to a stop.  I managed to avoid going down and saw the random wire cable across the road that had gotten entangled in people’s bikes.  Haley and I regrouped and then headed towards the hills where we scrambled up loose rocky climbs to the trails. It was 8:00 and already hot.

For the rest of the day we drained bottles, fuelled and rode the hardest pace we could sustain while saving something for the final 15km.  Today we intentionally backed off on the hot climbs to not overheat and then absolutely drilled it to the finish line and we did it!  We won!!! And then we waited… and waited.  The day proved disastrous for the other women’s teams with mechanicals, crashes, heat, some bonus miles and upset tummies.  We went from 2 minutes back in the GC to 15 minutes ahead.  It’s not the way you want to move into the lead, but it was also a good reminder for us to stay focused, calm, and take it one day at a time. Anything can happen in stage racing.

The women were beginning to think the Leader’s jersey was cursed at this point.  No one had been able to hold onto it for more than a day, but Haley and I were determined to prove that wrong.  Today was going to be shorter and boasted the most singletrack. It also would end with the same flat and rough 15km we lost the race on two days ago after leading for 87km. 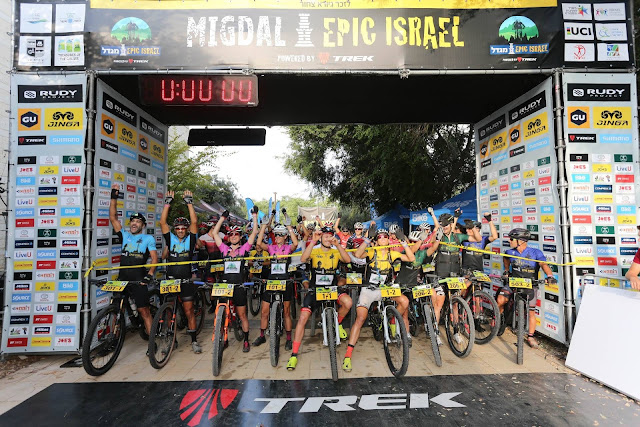 Today, as race leaders, we got to start on the very front row.  This was an interesting challenge.  Starting ahead of Elite men isn’t necessarily a good thing and we spent the first 10 minutes just trying to find a wheel we could hold.  When we did, it was alongside the other top women’s teams.  We entered the first feedzone and off-road climb with them, but once into the singletrack Haley and I were able to get to the front and notch up the pace.  For the first time in days we were treated to a beautifully smooth singletrack climb that crested and entered a long flowy descent.  With perfect timing we caught a group of men at the base of the descent and had a group to ride with as we entered the flat farm roads to the finish.  We drove the pace together through woods and banana plantations until there were only 4 of us still together. It’s a funny thing being mixed and able to work with men while having a separate women’s race we were contending for.  Unsure of whether the other girls had others to work with on the flats or not we asked if we could take over leading for the final km of the race.  We wanted to earn the victory ourselves, not due to help or the misfortune of others, but because we had buried ourselves and were the strongest on the day.

We crossed the line with a healthy win and got to see the next three women’s teams ride in together after duking it out for the final podium positions in the final kilometers.  Despite adversity, the strongest teams had secured the GC podium and everyone was happy for a champagne shower even if the thought of actually drinking any champagne at that point made us feel ill. 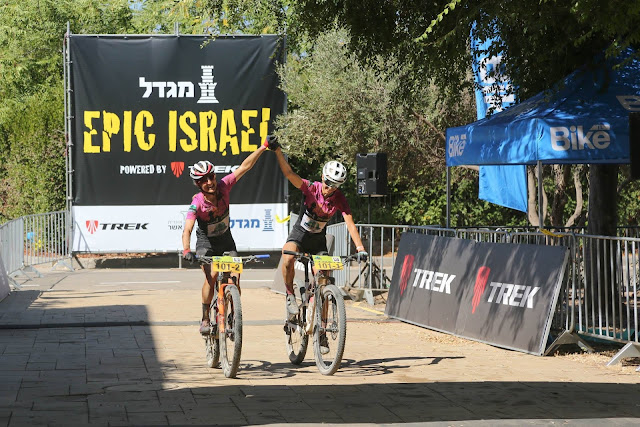 Israel, it was definitely Epic.  Thanks to the organizers and volunteers who kept us going and to the amazing group of women and men we shared the week with.

Reznik David said…
Wow what an amazing ride you girls had!
We shared some km along the way (Team Babies No. 19) and your ride was inspiring, calm & cool with no signs of panic.

So happy to read that you had a great experience in our lovely country both professionaly and culture wise.