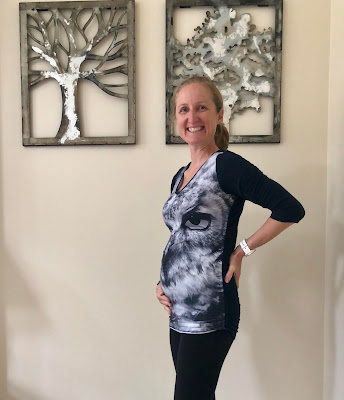 I think pregnancy always comes with a bit of anxiety as there are so many unknowns and a lot of changes, but being almost 40 adds probably a bit more with its 50% miscarriage rate in the first 12 weeks (15-20% risk across ages) and geriatric status, but it’s also pretty exciting to be pregnant despite the unknowns, so I’m trying to enjoy that while also navigating some scary personal pregnancy challenges and what training or life can look like now and as my belly grows.

As a female athlete there never seems to be a good time to be pregnant and Covid19 and Olympic postponement definitely threw up some more question marks on timelines for me, but I felt ready to be a mom, a little nervous to wait to try any longer and that if pregnancy wasn’t in our cards to be able to go back into an Olympic year with renewed focus and no timeline doubts would be a good thing.  I do still plan to race next year, and race well! And I am fortunate to have the support of the Clif Pro team to do so, but of course my race start date still has a lot of moving variables. I would love to think I can be back with some form and demonstrable improvement for the last Olympic qualifiers in May, but if that is too ambitious I can’t wait to be strong for other World Cups and great North American events like the Epic Ride series.

I don’t know if I just didn’t really pay attention to what goes on in pregnancy because it didn’t impact my life directly or if there is just a lot about that first trimester that gets glossed over, but there has been a learning curve for sure. I certainly found Sonya Looney’s blogs https://www.sonyalooney.com/pregnancy-chronicles-of-a-pro-cyclist-part-1/

and her podcasts with Catherine Cram, Rose Grant and Laura King helpful as a future athlete mom and current pregnant athlete. The app Ovia pregnancy has also been super helpful telling me what to expect and what is happening each week both with me and the baby.

I’ve been learning even basic things like why its 40 weeks rather than 38 of pregnancy– It’s more accurate to go off of the first day of your last period than presumed conception date - but your first ultrasound gives you the best prediction.  My due date is Feb 3!

It was funny when I tested pregnant and started reading about symptoms because I realized why I had been soooo tired and why all of a sudden, I had acquired an ability to crush naps that had always eluded my busy brain.  I had just thought Zwift races were really hard haha- actually I think they are, but it was the first time in my career that I have started a ride, got 5 minutes in and was like “I just cannot do this today.”  I just want to pull over and sit on the ground. So, I went home.  Crushed a nap and then did a wicked race simulation workout the next day, had another good training day and then got rocked by fatigue again. It was good to understand after several weeks that this was because I was pregnant and hormones were working hard so that I could set extra time aside for resting around my training.  When talking to other women, huge fatigue seems to be the symptom that really catches them by surprise. It is truly stunning how much more sleep you need in those first 3 months!

Although I have recently read lots of studies on pregnant athletes…or at least what is out there in peer-reviewed journals, I’ve also learned that every experience can be totally different. I moved to just base training pretty early, trying to keep my heart rate below ~145 because I had some high-risk factors like age and a recently discovered heart shaped uterus…not the most engaging training, but I committed to that and based duration on fatigue levels. One of the first things you notice when pregnant is how easy it is to start breathing hard (oxygen need increases 10-20% through pregnancy).  You feel like you somehow lost a ton of fitness overnight…and then the nausea starts…at least for a lot of women including me. It’s not all bad for sure, but this trimester does put you through a lot. I had heard morning sickness isn’t a good descriptor because it can be any time of day, but hadn’t realized it was ALL day, like from when you wake up to when you go to bed.  I was lucky in that I only threw up twice in the first 11 weeks, but for about 4 weeks, I felt pretty gross and I only wanted salty chips and simple carbs- my friend Jenn pointed out “isn’t this just what every athlete wants?”  Some truth there haha, but the difference is that other food at least feels palatable normally. I really had no appetite for meat, vegetables and even my favourite, yogurt. When you go to that ultrasound and see your baby has a heartbeat though, you’re pretty willing to let it wreak havoc on your hormones though.

Just before that 11-week mark was also when I started bleeding.  I can’t tell you how terrifying it is to be pregnant and wake up bleeding.  I for sure thought it was a miscarriage until my doctor told me I would have bad cramps and lose tissue with the blood…so a little relief, but still stressed. I had two more heavy bleeds that night and anxiously awaited my next ultrasound appointment in a couple days, trying to stay positive, but also prepare myself for potential bad news.  At this point I was doing no riding or an easy spin and the bleeding had stopped.  At the ultrasound my baby was still beating strong at 165 bpm and I could even see their arms and legs!

The ultrasound revealed I had a sub chorionic hemorrhage.  This is a tear where the placenta attaches to the Uterus – this is present on most women’s ultrasounds first trimester, but normally is does not bleed or become as large so is not mentioned. My activity level was the one variable I could control to possibly create a more stable environment while my body needed to heal- so no exercise for me for a week as a precaution. I embraced this inactivity, but two days later I started bleeding again and I was put on bed rest for a few days.  It was ok.  I caught up on emails and movies and tried to send healing energy to that hematoma.  I felt guilty about being an athlete being so inactive, but I also knew it was necessary to do everything I could even if that meant doing nothing. Mingus barely left my side and Keith demonstrated some latent and much appreciated cooking skills.

The first trimester definitely showed me it may not be the smoothest 6 months ahead, but we’re just taking it one day at a time and letting the little one’s needs dictate the pace of life.

Transition to Second Trimester (July-August).  Sometimes it gets worse before it gets better.

When I started writing these blogs I was hoping I could share how I was navigating training while pregnant because there are so few resources for super active women, but the truth is at times I have had to stop thinking about trying to maintain fitness and just how to be a good environment for my little one to thrive. That has been tough, not only as it’s scary, but because training is my job and a large part of my routine and identity, I had fully expected to be that woman crushing pregnancy and training, but for once my body has decided to show its vulnerabilities and at times I had to do a lot less than the average non-athlete pregnant woman.  Paradigm shift!

The first day of week 13 though, it really was like a mental and physical fog had just lifted off of my body and it was so amazing to feel clear and energetic again.  Week 12, perhaps because of the bed rest, perhaps just the week of my pregnancy, had nausea and vomiting hitting me pretty hard.  I am so impressed by the women that work a public job through pregnancy.  For some it must be like working through 2+ months of the flu!  I only had to run from one zoom meeting to puke haha, But the resting appeared to help because after a week of rest my hemorrhage stabilized and I was cleared to start reintroducing walks and then easy spins, first on the trainer and then outside.  This seemed to be going well, but after 7 days with no bleeding, I started bleeding again. It was super stressful, but luckily the bleeding didn’t affect baby growth.  Our baby has been growing well and I even got to watch it moving around lots on my last ultrasound, but my hemorrhage also increased in size so it was back to no walking or biking for quite a while.  For sure this was a dramatic life change for me, but one I was happy to make if it made the difference in my pregnancy being successful. If it had to be 6 months of inactivity that is just what it has to be, but obviously I was hoping not!

So, as I recorded my lowest training volume month (August) in 15 years I know it's just the way it has to be and athlete me frames it as a needed mental and physical break from high performance that will give me renewed focus and energy down the road for the next chapter.  Pregnant me just hopes this gets less stressful!