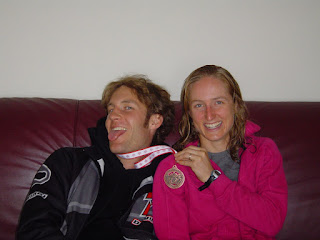 First off Just want you to know my Bro finished 3rd at Canadian DH Nationals. Ripping! This set the weekend up nicely for another Pendrel on the podium.

Mt Washington Resort on Vancouver Island hosted the 2007 Mtb National championships. Mt. Washington is a beautiful hill with great vistas, riding and alpine meadows and lakes. As usual Tim Hortons was sponsoring the event and kept the riders and volunteers full of warm coffee and treats. These were especially appreciated this weekend as the weather was not cooperative. It rained pretty much straight from wed afternoon until Sunday morning. At times it was a light mist and at others full on down pour. Tuesday I did a tempo lap in 24 minutes (dry), but by race day lap times were 28-30.

After many days of rain, the course was very mucky. The opening climb forced all riders to dismount at some point. MHP as expected took the lead from the start, but I was able to maintain my top 5 starting position into the base of the climb and was fairly successful at the mucky climb. Melanie Mcquaid started like a storm and flew by me on foot to claim 2nd into the first woods. All the contenders were close as we entered the woods (Kiara, Wendy, Sandra, Mical, Amanda). We were all blown away by just how fast MHP could run. I think I spent 2 laps thinking about this before I regained focus on the task at hand. Man she’s just fast everywhere! She can go harder for longer whether on a bike or on foot. I think I would have actually raced closer in time to her had it been dry.

Melanie went down in a mud bog at the top of the first descent getting between Kiara and myself and allowing me to open a gap. After the first gnarly, rooted, and twisty descent we took a short fire road to a meadow which had become a soggy, mossy leg drainer. I slid out on a crossways log and Kiara and Melanie were on my wheel. Kiara and I rode away and I had the lead into the second descent. Kiara was descending really well behind me and I lost concentration and slipped going down. She sweetly asked if I was okay before smoothly taking the lead. I was able to stick with her down the descent and up the next climb. I wasn’t prepared to settle in though. I like the success I’ve been having and new I’d have to ride aggressively to get the silver. So, on the climb to the feed zone I sat in until I was ready to spring and then went for it. Through the feed zone, down a fire road and back into a neat climb that forced us to keep focused. I think I get to claim being the only one to clean this entire climb multiple times…yet MHP was still putting a minute+ a lap into me! At the top of the climb we rode up a rock face, across a rocky outcrop, down some steep faces and then do some twisty mucky single track before getting back to the start finish. I wasn’t cleaning the rock face in the wet so spent more time running than I would have liked, but overall I was riding well up and down. My Norco is perfect and Sram kept me shifting and on top off my gears all race. 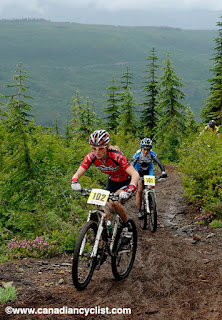 Rob Jones captures the race and course conditions
It was a strange race because your muscles got so much more taxed than your lungs. I couldn’t race as hard as I would have liked because I had to be so smooth and calculated to clean things. After first lap I maintained my second place to the finish. Kiara still nursing a sore back after the MSA crash was third and not surprisingly Amanda Sin rode strong finishing 4th. Simms is back on track and moved up through out the race to finish in 5th while Mcquaid and Walter took 6 and 7th. Mical, who has to be praised on her ability to overcome adversity and keep smiling, built up a new bike that morning and feeling completely drained pulled off an 8th place finish. Good work Girls!!! 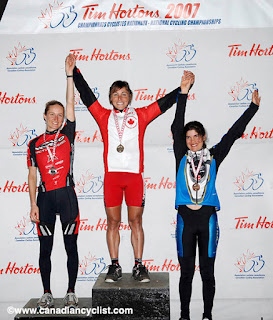 Chris said…
Great job this weekend at Sugar! I was the nerd that wished you good luck before lineup. It is different watching a race for once, let alone with the best racers in the world in it. You and Willow were so close! Anyways, have fun :)
5:24 PM