Hope you brought your climbing legs! 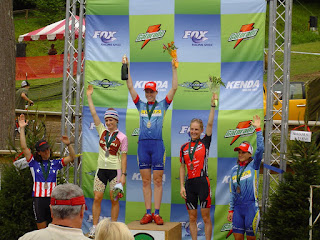 Wednesday night Mical, myself and Kris Sneddon arrived in Charlotte North Carolina for round 5 of the NMBS series. Luckily I had already reserved a car as only 1 agency still had vehicles left. We had to try out three different SUV’s however before we found one that could fit three people with bike boxes and luggage. It was a little sketchy with one box jutting into the front seats so that when I had to brake hard catching a restaurant entrance last minute the box came forward shifting the car out of drive. It was a bit of an epic trip through the twisty, hilly roads out to Banner elk. The directions we had were limited and the signage even worse. But eventually we pulled off the foggy wet road and were given beds at the Kona team house. After a wicked 10.5 hr sleep Mical and I set out for a pre ride.

Starting at the base of Sugar mountain the course headed up….way up to the top. I’m not sure how many km we climbed nor what the elevation change was, but I was the first racer to the top of the climb first lap and it took me 30 minutes. After this climb we headed back down the mountain looping in and out of the woods as we crossed ski runs loosing vertical quickly. The descents were really rocky and the thunder showers the last few afternoons made the course greasy. In preriding I had been descending okay so I was a little unnerved when I entered the woods and was a pinball being tossed back and forth from Rock to rock. I really should have left my tire pressure as it was rather than adding more with someone else’s pump and gauge that morning. Georgia Gould and I had been duking it out on the climb, but I had opened a gap near the top. By the time I was in the woods though she was on my wheel. We both struggled down taking turns apologizing and letting the other pass as we picked ourselves up from spills or near spills. I went down hard on my hip on one rock and she pulled away.

Heading into lap 2 Georgia was still in sight and at random points I could see Marry McConeloug or Katerina Nash behind me. I did another hard 30+ minute climb, but didn’t have the legs to reel in Georgia. Heading into the first woods 2nd lap I could hear a rider closing on me. Willow was ripping up the single track, hungry for a podium position in her home state and known for her technical skills. She caught me near the end of the descent and we rode the rest down together and headed out onto the climb determined to reel in Georgia together. We took turns at the front when one of us was stronger in a section. My legs were definitely hurting, but when I was on her wheel I felt good and within my limits. It was all good until the course turned steeper and I just couldn’t produce more power. This was at about 20 minutes up with 10 minutes still to go and Willow just starting pulling away. I was desperately hoping Mary and Katerina weren’t close enough to close because I wasn’t confident I could respond if they caught and attacked me. I crested the climb in 3rd and was pretty confident I could hold it to the end.

Three laps took me 2hr and 38seconds and I ended up losing just under 3 minutes to Georgia and 1.20 to Willow, but held off newly crowned Czech National Champ Katerina Nash and US National Champ Marry McConneloug. Wendy and Mical duked it out all race dropping the girls they were racing and finishing 12 and 13th. Joele rode a strong race making a couple guys feel abashed at how she could school them on the technical descents after 2 years of riding. Kabush took 2nd in the men’s race to Jeremiah Bishop. Toulousse finished 9th, Sneddon 12th and Hadley 16th. Solid rides all round.

So I finally got my first Norba podium! Short track is today at 3 and it looks like we’ll be getting more rain.