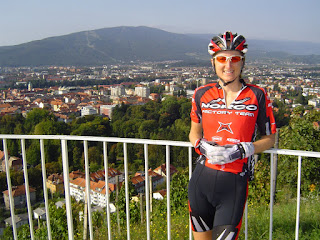 That mtn in the background is part of the Pohorje range and the site of the World Cup. Below is Maribor.

Sunday, after riding around Maribor to check out some local scenery, Sandra and I packed up the Golf and Headed west to Portoroz and the Adriatic Sea. Although most Europeans seem to be great drivers, Slovenians miss this talent a bit making for intersting driving. On the way to the coast we stopped in Postojna for some cave exploration. We spent and hour and a half walking through underground caverns surrounded by stalactites and stalagmites. Although from the outside the place looked disgustingly touristic the caves were absolutely amazing. 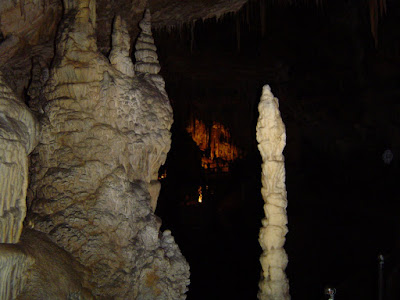 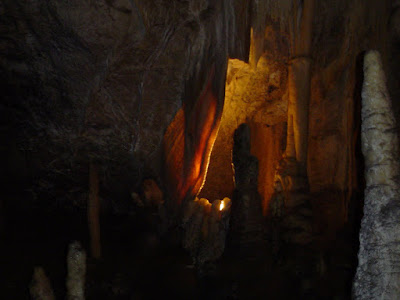 Stalactites and Stalagmites.
The caves were huge and went from 80 to 150m down. Some caverns are so large they hold concerts in them twice a year. Neat, but bring your coat!
After that long in the cool caves we were happy to return to the sunlight and warm temperatures and continued on to the coast. Although only a 2.5 hr drive we had to go through something like 5 tolls. We arrived in Piran, a coastal city, only to find parking in the city was only available to locals. As I tried parking within the town a parking officer came up to me and said. “you are soooo Lucky I see you. Look.” I looked. “Look” In small print, below three other languages was a little sign that said “Parking for inhabitants only”. Again I was told how lucky I was as I was made to move my car. I didn’t feel lucky. I just wanted a parking space! 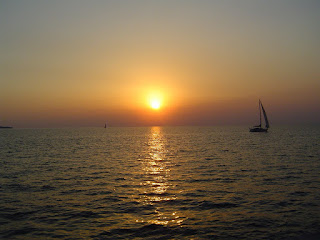 A beautiful evening awaited us in Piran
We strolled around the city for a bit, but not wanting to hike all of our luggage and bikes to the hostle we headed down to Portoroz, the next city. Portoroz was more than a little more swanky than we had anticipated. We couldn’t find anything less than a 4 star hotel with prices to match, but at this point we were so beat that we gave in and settled on the hotel that had offered us 40 euros off their standrad price…still almost double what we had envisioned paying. 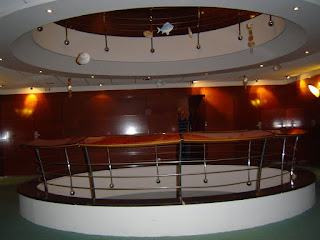 Our hotel
The next morning we enjoyed the deluxe complimentary breakfast and headed out for a ride. The ride was amazing. We just biked around until we saw something interesting and then headed in that direction. First we climbed up the wine route through vineyards, olive groves and Bamboo. Then we saw a neat old church atop a steep hill and found our way to the village of Korte. The houses were all built close together so we passed through narrow cobbled alleys with stone buildings in various states of repair or disrepair on either side of us. From there we were treated to an 18% twisty descent. We decided to head up to the next church on a hill and made our way to Paden a similarly enticing town.

Through lack of road signage we ended up at the border to Croatia. We then figured we obviously should have turned right not left and headed back to where we had come from. We rode up a long gradual climb to a gas station at the summit. We took advantage of the gas station to check out a map and planned our ride home through the various coastal towns. After a 5 minute intense rain shower we found our way onto a bike path that took us along the Sea, through tunnels and farmers fields and 2.5 hrs later we were back in Potoroz in time for me to pack up my bike for China, grab showers and head to the beach.

We had come to the coast with some Bikini time in mind, but the weather was not cooperating. After a blustery beach walk we headed to an internet café. Just before we made it it started to down pour and we were trapped under a shop awning. I haven’t seen rain that hard in a long time. You could watch sheets of rain blow down the street. In a minute of running we were thoroughly soaked making the cappuchinos at the café pariticularly good. 1hr later the rain stopped and the sun came out. Yeah!

We headed into Piran and spent an hour in Bikinis dipping in the Adriatic and soaking up some sun. We then did another pass through the town to get some gelato. Kids were out in the sea getting a swim lesson… Sure beats the pool. 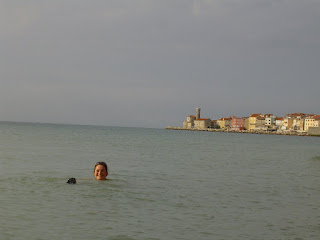 Sandra was in Heaven floating in the Sea with the City of Piran in the background
Unfortunately we had to make it back to Graz Austria that evening so our beach and town time were cut short to make the trek back across Slovenia and into Austria. It was an awesome way to finish off the World Cup Season and get some mental freshness before heading to china the next morning.