Racing is officially over…time to be a tourist 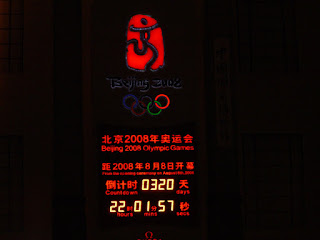 The official count down! 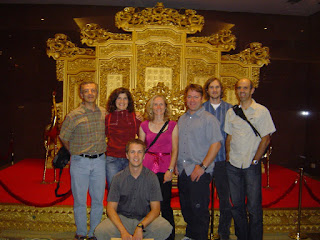 The gang Houshang (coach), Kiara, Me, Richard (Chiro), Chad (mechanic), Michel (Performance manager), Ben (physio). Yes it does seem like a huge staff, but COC has alotted funds for a performance team.

Michel Leblanc, former national mtb coach is now Sport Performance manager for the COC. He was with us through the week ensuring all the things were in place for us to have good preparation for the event and to workout the kinks for next year. He was also our guide/host for some great sightseeing. 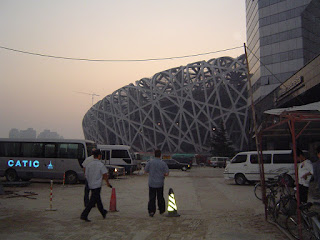 The Birds Nest will hold the opening/closing ceremony and athletics. Check out that haze!!!
After the race we got cleaned up and headed out for an eveining on the town. We drove by the Olympic village and related buildings and then did a walk around Tianamen square and checked out the official Olympic countdown timer. After that we went out for dinner. Again they served us Western Chinese food, but we got to have some mooncakes. Sept 25th is the moon festival in China and a big celebration. Baked goods stuffed with a range of things from nuts to fruit to bean paste are eaten this day. 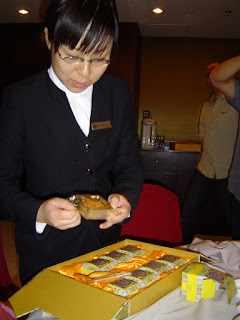 We could choose between Pumpkin and Egg/peanut mooncakes
Sunday was an epic tourism day. We started with a drive out to the great wall. We took a chairlift up and hiked along the wall for about a km. It is quite steep in sections with lots of stairs. It’s amazing to think the wall extends for thousands of Kms. I can’t imagine the hours put into its construction. Not worried about preserving the nature of the area a tobbogan type slide runs from the wall back to the base. It was a super fun ride down, made frustrating by the people in front who wouldn’t lay off the brakes in the corners. Still though, it was a good time. 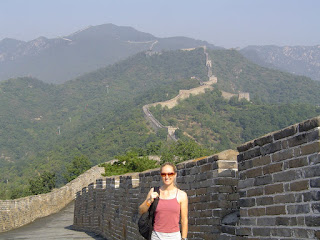 The great wall
Afterwards we took our chance with a food vendor to try sprout filled dimsum.

From there it was off to the Forbidden city where michel bargained with a local who offered to be our guide. He was a funny guy who enjoyed joking around and telling us little trivia about the emperoros and concubines (3000) that had once filled the city’s walls. The palace and grounds were very ornate and attractive with most of the construction in marble. The city is having many renovations done to it so it is prepared for the Olympics and swell in tourism next year. We ended out tour in the Emperor’s garden and moon festival building. 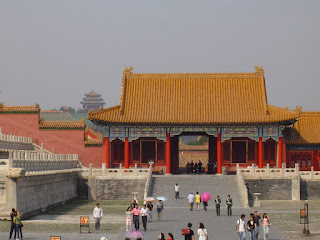 Inside the Forbidden city.
The city opened to the public in 1925 after 3 years under the Child Emperor appointed at age 3
Now things got serious. We headed to the Silk Market with our game faces on. The silk markets are all about bartering. From the outside you have no idea of the Chaos that awaits you. People pull you into their stalls to check out their wares which ranged from perls, to Arcteryx jackets, beautiful silk embroidered clothing and tablecloths, shoes, artwork and chopsticks. They give you a retail price and immediately say for you a special price. From then on it is barganing back and forth with prices being offered on a calculator. If you pay more than 10% of their original price you’re likely overpaying. The market was 5 stories high and we all split up to seek out our items and compared finds and prices when we next saw eachother. 3hrs later we all carted shopping bags full of gifts out to the car. You can’t rent a car in china, you have to rent a driver and his vehicle. Our poor driver must have been glad to drop us off at the end of along day!

Last Day
Kiara headed off early for her flight while Houshang, Chad and I didn’t leave until 4:30 that afternoon. We had planned on a trip back to the silk market, but with Monday morning traffic we didn’t want to risk it. So instead we explored the area around our hotel finding a street full of produce and snack food vendors. As the food was lain out beside heaps of garbage and stagnant water, it wasn’t something we intended to try, but was neat to see that other side of the city. From the giggles of the locals I don’t think they were used to seeing tourist there.