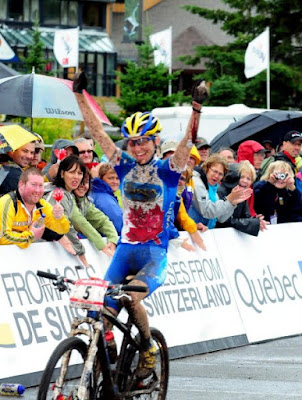 
Sue, Rod and Luna (their dog) came up from Fredericton New Brunswick to watch the Luna team race 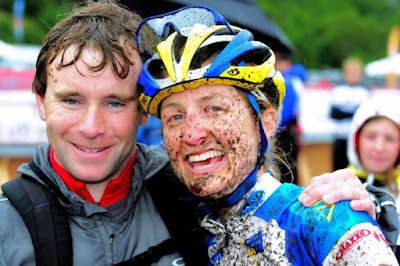 Keith was there for the finish as well as my mom, Dad, Luna Team and some great people from NB. (Thanks for the nice picture Dave. Check out coverage on cyclingdirt.org)


I’ve been racing in MSA, Quebec since I started racing elite nationally in 2004. It was always one of my favourite venues and a course I could do well on with its steep demanding climbs and fast rugged descents. Sunday topped all my other race days in Sainte Anne with my first World cup win of the Season and sharing the podium with teammate Katerina Nash.

For those that like the nitty gritty race details here you go. This year the organizers made some substantial changes to the course lay out. The hallmark descent was removed and replaced with a rough rocky one, the course looped back on itself even more than usual and 2 short but challenging climbs were added.

The women were scheduled for 4 laps and it promised to be slick if not actually raining. The start was going to be critical. After a relatively short climb up a mix of dirt road and grass we were fed into singletrack where passing would be impossible unless someone dabbed and let you by. Based on world cup points I was called up in 5th position. From the gun, things were a little dicey with a rider veering over into me, but everyone stayed upright. I let myself get forced off to the side on the grass climb and a surge of riders swarmed me. I entered the woods in 9th, but not in the top 3 which I thought would be critical to winning.

Fred said…
hear !!hears!!I am one of your biggest fan you are my idol. And again thank you m have signed my jacket and have signed the plaque in my young and left a note for my other young people. It was ravi.J hope that one day you will consider coming to our Canada Cup cycling in our beautiful corner of Charlevoix
5:34 PM