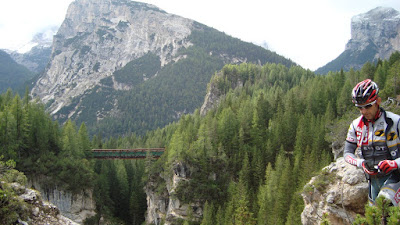 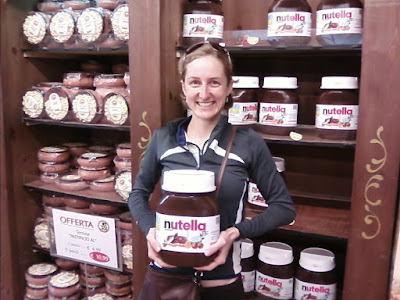 Now there's something you don't see every day. If you're going to Super Size something it may as well be Nutella. Eat in moderation of course ;) 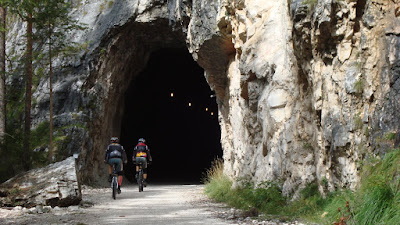 Old rail tunnels through the Dolomite mtns. Yes Italy was a bit of a detour going from Switzerland to Austria, but worth it. 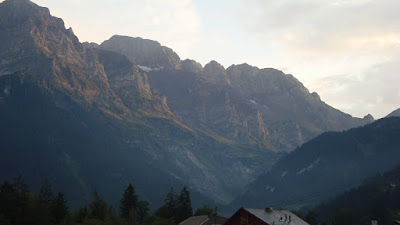 Champery. Host of World cup #7 and the 2011 World Championships.

Now to that continent jumping schedule

10:45 am Sunday September 6th left Worlds in Australia, flew 15.5 hrs to Vancouver. I got to fly first class with an upgrade certificate. Yes it is as good as it looks.
10:45 am Sunday September 6th Yes that’s right. Departed Vancouver for Kamloops (the time change worked in my favour). Enjoyed coffee and a hike with Keith
Sunday to Thursday am enjoyed being home in Kamloops. Freak out when Keith drives wrong way down the road, only to be thankful I wasn’t driving when I realize I’m still thinking Aussie rules.
Thursday September 10th Leave house at 6:30am. Fly all day to Europe. Arrive in Europe Friday am, put bike together at airport and go for ride as I wait for teammates to arrive. There are bike paths right from the airport. Europe is great this way
Friday September 11th 9pm Arrive in Champery, Switzerland
Saturday training on course 9-11am. Course is awesome. Half of the course is my strengths; steep climb and steep rough descent. The other half of the course I enjoy but am mediocre at; it is undulating terrain, lots of transitions and short power moves.
Sunday September 11th Up at 6:30 am for race breakfast. Race 10:45
I really like the town of Champery. Large, rocky mountains loom all around you while lush valleys surrounded by mist promise great riding and hiking.
The course is fun and challenging and one I thought I could do quite well on. I am in a 5 way battle for the world cup overall win and really need a win or at the least a podium to secure a top 3. I felt awesome at home riding with Keith. Being on home trails with worlds form left me feeling excited for this trip and the chance to earn some top results.
I felt like my body handled the time change and travel fairly admirably and that with a different approach (getting back to basics and racing by instinct more than planning and being super focused) I could have a great ride. Saturday afternoon the skies opened up and the rain came down in sheets soaking what was already a fairly slick course. Sunday morning Georgia and I switched to Ignitors to give us a bit more grip on the loose chutes and slick roots.
The start was fast with a 4+minute paved climb where I kept getting pushed off the pavement as I tried to maintain my position near the front. As we crested the climb the race was still very much together and I entered the singletrack in about 13th. People were flailing down the descent and it was difficult to remain patient. Girls were walking down sections I was trying to ride and not going to move. By the time I got to the bottom of the descent I had already lost 45 seconds to the lead rider. I had crested the climb in the bunch, but that’s the difference between a clean run down the descent and riding in traffic.
The race was very competitive. I would try to eek out an advantage on the climb only to be caught behind a slower rider on the descent. On the half of the course where I was weaker I would constantly be out sprinted for the singletrack and then, not being great at following or recovering quickly from mistakes I would loose positions or time and have to reclaim it on the other half of the course. It was a real yo yo race for me, but I felt strong and focused and like I really pushed myself.
Unfortunately this hard effort meant 10th on the day. With Irina and Marga both dropping out of the race however this result was enough to move me up to 3rd overall in the series with one more race to go. Mathematically 1st and 2nd are out of reach but with a good ride in Austria I can maintain 3rd.
I think my family was worried this finish would really rattle me, but in a sense I think it helped to ground me. I thought I was handling performance pressure well; people’s and my own beliefs and assertions that I could win Worlds, Bromont, this race. Maybe those results were possible, but not unless I rode to perfection and perfection takes time and rarely happens more than a few times a season. This being my 3rd year on the World cup circuit, I am still relatively new and have a lot to learn. When I’m on I’m on, when I’m not I lose time in frustratingly large chunks.
I am going to World cup finals in Schladming with the podium in my sights. I feel good and know that if I put it all together on the day I am a podium rider. So off to Austria we head with some days in the mountain on the way.

Sues said…
You go Catharine! We know you will have a strong race and if you listen really carefully you will hear your cheering squad back in Canada!
2:59 PM