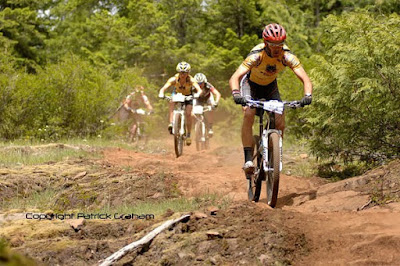 Day 2: Cumberland. I like this stage. Big Climb, BIG descent. We got to stay at the Kabush's home for 2 nights which was great and after a good sleep I was looking forward to racing Cumberland's flowy trails. We initially lost the race leaders Chris Sheppard and the Kona Boys, but then tucked in on Geoff's wheel on a fire road we came up on a group. It was all the leaders. After sitting in a bit i went for a fake attack off the front to rile up the guys, but then eased off to let them have the singletrack first. We were able to stick with them for an hour through flowy singletrack and until the base of a 20 minute climb up to Forbidden Plateau. From there, the guys really started racing and I waved them good bye and settled into my own group with geoff.

We crested the climb with Andreas, Blake and Ron and headed into a super fun rocky descent. Entering the descent Geoff went for a v ramped bridge and I followed. When we were both on it we realized there wasn't a ramp, but a large drop. Luckily I survived and we all got a good laugh before railing down the rest of the descent and back to the finish. Time 3:04

That night I got to have an awesome dinner with friends Emma, Jon, Aya and Solay at their newly built Yurt. Thanks Guys!

Day 3. New to BC Bike race was a stage in Powell River. This stage was mostly flat singletrack. Some of it very fresh through some of the most beautiful mossy cedar forests I have gotten to enjoy. 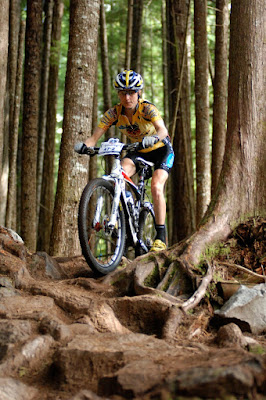 Kelly Sherbinin sadi it right when she said "I was afraid the moss would grow over me if I went too slow through the forest." The day was tough, hard to hydrate during and not always easy to keep momentum, but we went pretty damn fast through the woods. Going fast is always fun so it was another enjoyable day with only one course detour. Time 2:51:52

That afternoon I got to enjoy my first real down time of the trip with a walk in the ocean, maybe too much time in the sun and a water front massage! Amanda, James, Peter and Keiran from Rocky Mtn:Maxxis adopted me as one of their own for the week. Amanda had delicious gourmet sandwiches ready for us after the race and prepped our legs while James washed and dialed in the bikes. Peter (Boss) and Keiran managed the fort logistics.