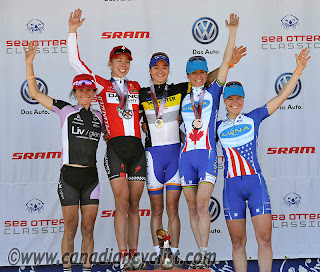 That first race, nerves are high as you line up to test whether you have it or not.  There is no hiding, there is vulnerability, there is pressure and there is opportunity.

This year my coach Dan and I have taken a different approach to our training.  It is the start of another quadrennial.  The last quad was undeniably successful, but ended with a little heartache.

To keep it fresh and continue improving you have to change up your training stress so we have taken more of a volume approach to training this year.  Typical I have tasted blood several times before my first event! This year we’re saving the real high efforts for later.  This approach has led to some fantastic training, but also meant I was going into my first event less sure of my speed.

Sea Otter is probably the most chaotic event out there.  It is about so much more than racing.  The opportunity to have so many riders, spectators and sponsors in one place at one time cannot be passed up and doing anything takes twice as long as you run into everyone you haven’t seen since last season.  Sea Otter is about going with the flow, having some boundaries, but mostly being adaptable and not sweating the small stuff.

Short Track
The short track was going to be the first test of legs.  Despite telling myself to “own the Start line” when we sprinted from the line I let myself get squished out which was very detrimental on that course.  There was a choke point 150m in and I had to run a section to stay in the game.  It took a lap and a half, but I found my groove and was chasing down the leaders when into the same choke point again a rider rode into my front wheel and in the randomness that can be racing their foot kicked my valve stem and my tire went completely flat.  No tech zone, no air à no more racing.  That was my mechanical for the year though, right? We raced the Sea Otter cyclocross course for short track so it was only fitting that it would come down to Marianne Vos and my teammate Katerina Nash for the top 2 positions.

The afternoon was spent hanging out with a couple cool high school girls chatting race prep, finding a shady spot for Yoga and then our annual Luna party.  Maybe not your typical pre-race day, but your typical Pre Sea Otter race day! 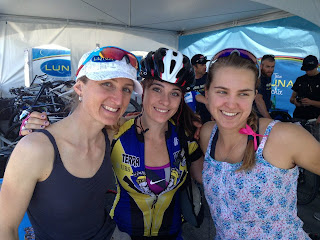 The XC
Sea Otter offers a unique cross-country race.  Starting on the pavement of the Laguna Seca raceway we head out on a 20+mile loop.  The loop has a lot of fire road, twisty, loose descents and definitely ample climbing.  The weather was hot and there is very little shade so with only one feedzone you have to be pretty smart about your hydration and cooling.

Because of the pavement opening, the start is pretty chill. It’s not actually until several minutes in that someone decides leading is worth pushing the wind. Annie Last did a lot of the early work and I nabbed 2nd wheel so I would be well positioned for the first single track.

My race plan worked well. I lead the first singletrack descent and singletrack climb where passing is pretty much impossible and I could set a tough pace thinning the field.  At the crest it was only myself, Marianne, Annika, Georgia and Katerina.

On a dusty rutted descent Katerina took a nasty header.  By the crest of the following climb where Marianne led and attacked every steep section only Annika and I were still there.  From about 30 minutes into the race till an 1hr 10 we traded up pulls and tried to keep a good pace and flow.  I was leading a long wooded climb into a descent and headwind with a wall-like climb ahead when Vos made the race winning move.  She jumped out of the draft with an impressive acceleration.  Annika was able to match her, but I had to watch them race off into the distance trying to collect myself into tt mode so as not to give up too much time.

Sea Otter ends with about 10km of fire roads that seem to mostly climb. I could see the girls in front attacking the crest of every climb, but luckily couldn’t see anyone coming behind me.  I held on for 3rd, feeling pretty pleased with my form knowing I have a lot of room left to grow it.

Looking forward to the first World Cup in Germany May 19th! 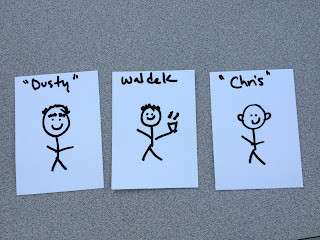 Thanks to our awesome Luna Staff for making for a smooth event!