- September 19, 2015
After touring Spain and getting in a couple days at home it was time to go back on the road, this time to Vegas. Vegas is always a crazy experience of busy days, limited sleep & limited exercise.  The oxygen infused, dimly lit rooms create a time warp where you become unaware of how many hours have passed.
There are several highlights of the show for me.  One is Cross Vegas which this year became a World cup, another is our annual ClifBar Party.
Cross Vegas is awesome, not only because we get to be outside moving, but because we race under the lights at 8 pm with about 12000 industry folks out having a good time and cheering us on.  I wasn’t really sure what to expect of my first cross world cup, but was excited to get out there with my Luna teammates and our guest rider Eva lechner to crush some laps.

The race went way better than expected and quickly an ideal lead group formed with Eva, myself, Katerina and Sanne Cant.  I was happy to not trip over myself and be left behind on the mounts and dismounts and worked with Eva to keep our group ahead of the chase group.  It was windy and a super tough course, but an absolute addictive blast. 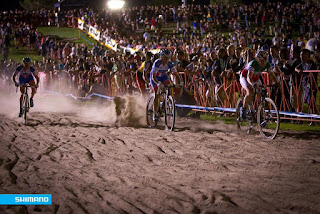 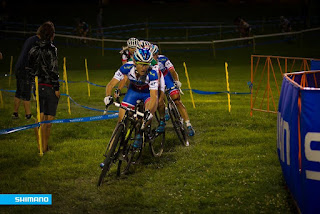 Katerina attacked with 15 min to go and got a gap, half a lap later I was slow through some steps and Eva rolled away, but Georgia was able to bridge up to my self and Sanne and I lead out the sprint into the finish getting nipped on the line by both and took 5th.  Maghalie scored a 9th place finish making it an amazing night of racing for the whole team and a perfect way for the Luna team to wrap up the season together. 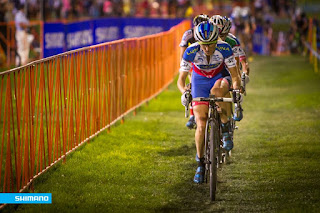 You get back to the hotel from Cross Vegas at about 1am totally wired and hoping for a couple hours sleep before another full day at the show.  You have to be rested for stage 2, the ClifBar party, which hosts intense matches of skill like foosball and corn hole (aka speed bagging).


ClifBar knows how to host a great party, with Scott Whips as DJ, Dave Towles announcing and free beer and food, it is an industry crowd pleaser; and that was before Maghalie started dancing.  Speed bagging was intense. Maghalie and I made it to the semi finals before being knocked out of the match. 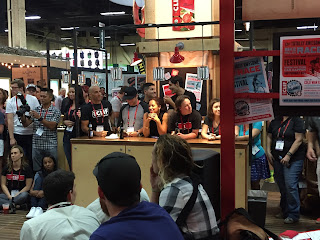 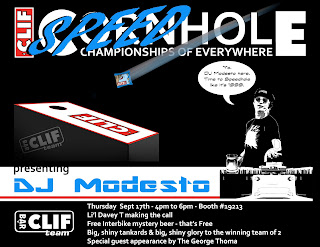 More shenanigans was had and then it was back home to recover.  Yay!

Just a couple more events to go this season,  CykleScramble this weekend in San Fransisco and the Olympic Test event in Rio in October.  Excited for both, but first, sleep!