Training after a baby

- November 18, 2021
If I were to sum up my training after a baby in one word it would be conservative.  That may seem funny since I was able to return to racing at a high level on a short timeline (World cups in 3.5 months and Olympics in 6), but for me a

big part of that success was from not pushing for too much too soon and risking getting injured.

Postpartum, your body experiences a lot of hormonal changes, breast feeding can reduce calcium and impact bone density, your pelvic region has been through big changes.... all of these changes, plus high fatigue levels warrant a cautious and steady approach on your return to form.

My first month postpartum was spent recovering and rebuilding.  I was able to ride and ski until the final day of my pregnancy and do 10+ hours of easy volume/week.  The first week after having Dara was all about recovery, getting sleep when possible and bonding with Dara.  At the end of week 2 I was able to get on the trainer for 20-40 minutes of easy pedalling to feel out how my body was doing. From there each week I focused on increasing volume knowing that just aerobic training would be sufficient to create a training response. It would also ensure that when I added intensity I had the base and strength to do so safely. 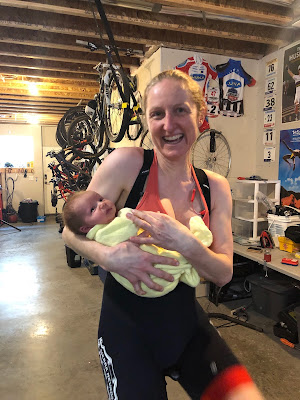 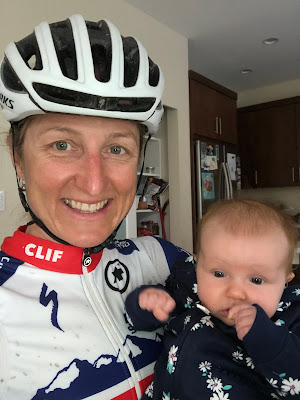 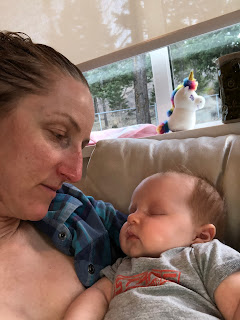 When you are able to get back to exercise, and what activities and durations you do, will depend on what base fitness you had before your baby, how your delivery went, your physical comfort and your support system (time, fatigue, well being) as well as your motivation -you may just want cuddles all day as priorities definitely change.  For me, hopping on the trainer was comfortable, familiar and easy logistically as I was always near my baby. It also provided some me-time where I could focus on myself, because let’s be honest, having a newborn can feel like you have given your body over to this little human that needs it ALL the time and this can be draining even if enjoyed.

Because I had years of training at an elite level and was able to train consistently throughout my pregnancy I entered the postpartum stage with a strong base and was able to progress quickly. I had set times of day when Dara slept a bit more or was less fussy which were my times to exercise.  I pumped milk for these times and also for one+ night feeding so I could get more sleep and more recovery.

After a month of just riding and introducing hills in easier gears I added hills with harder gears and just tried to get stronger through this natural loading.  Because I had a c-section biking felt good, but I had to be cautious with lifting or Mtn biking.  Even trying to push too hard of gears too early could have been too much, but by gently progressing how many watts I could push on the flat or on hills I was able to build back my core strength in a way that felt very safe and progressive.  Any pain or discomfort that showed after a ride or, in the early weeks, an increase in the bleeding you have postpartum - would have been an immediate indicator for me to stop what I was doing. Fortunately I had zero set backs.

Early postpartum I did not try to do my usual training 6 days a week, or my normal 3 week builds, recognizing a greater need for recovery.  I also didn’t try to push too deep towards fatigue on any given day because I never knew what night might be sleepless.  My husband and I did set up a sleep schedule where we alternated who took the feeds to ensure we both got some decent sleep. This was usually me taking feeds from 8pm-2am and pumping in the day or at this time so he had bottles to feed from 2-8.  This way we both got an uninterrupted 5-6 hours of sleep and then an interrupted couple of hours.  With this sleep schedule we felt really functional to train without naps, stayed healthy and both had good bonding times with Dara.  (If you are breastfeeding ladies, going 5-6 hours without pumping will lead to some - ok a lot of leaking, but it is worth it for the sleep and by pumping in the day you can maintain good supply.)  Also don’t be afraid to go to bed really early!  I know this can be precious time with your partner, but feeling better rested can also make your entire day more precious and those tough newborn times less overwhelming.

For an elite cyclist, 20 hr training weeks can be a staple of the training diet, but I did not do a 20 hour week until 4 months after…after I had returned to World Cup racing.  Because I had detrained during pregnancy my body responded to lower volumes and to be sustainable my volume had to be lower to ensure quality and recovery.

I introduced intensity at about 6 weeks into training. I actually jumped into a women’s race on Zwift and won which was a great boost, but mostly I was climbing hills at about 80-85% to strengthen and prep my body for harder intensity later on. 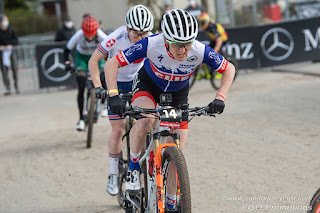 My return to racing was both excitingly fast and then a little disappointing.  I felt in training I might actually be able to crack the top 20, so that first World Cup in Albstadt where the wheels totally came off mid race was a bit, I won’t say unexpected, but disappointing.  But I had travelled to Europe last minute, had some pretty disrupted sleeps and after snow and rain the first days struggled in heat race day.  A week later and better rested I finished 23rd and it was so exciting! It was also felt unexpectedly like I had hit my big comeback goal of the season already and my uber focus relaxed for a bit.  I felt sure that another big jump would just happen with continued work.  I certainly felt the gains of increased comfort in single track at race pace, a more solid endurance base and the ability to remain focused and in the present in my races. Results were a much slower improvement however.  I was now at the point where my improvements through racing were occurring on pace with everyone else so although I felt stronger and faster, so was everyone else and I hovered around that low 20’s result marker all season with a win at an Italian Cup, an 18th at the Olympics and 15th at World Cup finals as my result highlights. 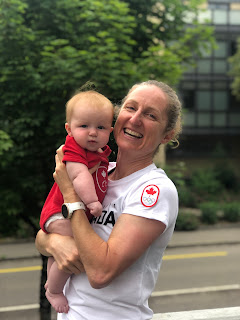 With greatly reduced training relative to myself in other years and my competition in the preceding 12 months it should not have been surprising that I found it hard to hit a higher peak form, but you hear so many stories of postpartum Pb’s and I had experienced such rapid progression thus far I really hoped and expected to return to at least my 2019 top 10 performance level.  At the same time, I had a tremendous amount of respect for the skill and fitness level of the women I raced around and could enjoy the fact that I was racing as far up in the field as I was, surrounded by women who hadn’t had the life and training disruptions I had worked through in the past year. That made me feel proud.

I do leave this postpartum comeback season with a bit of a lingering question. “Could I have found more?”  I definitely think being a top 10 or even podium rider 6-9 postpartum is possible for a woman with a smooth pregnancy and delivery and in the prime of her career and with a great support network....We got close at times! Several women like Gunn-Rita Dahle Flesja and Elizabeth Brandau have shown that 1-2 years postpartum they can come back to the highest level in mtb. Lizzie Deigan just became the first female winner of Roubaix having had a little girl a couple years ago. Even for myself at 40 in this compressed season, with perhaps a bit more focused meal plan once reducing breastfeeding (I put weight on mid season when I didn't adjust to my body's changing needs) or by pushing the training a bit more once we settled into parenthood- but honestly not sure how much more I could have sustainably asked for -I could have found another percent or two? I think trying for a faster comeback probably limited how high I could reach ultimately as I just didn't have a big enough base to build from and covid and having to base abroad to be able to compete and not quarantine definitely added some challenges, but I also think it's an athlete's nature to question if they could have found more.  As a new mom you have to recognize that energy is finite and being a little cautious or a little heavier can help you find consistent performance, and achieve your performance goals as well as your mom goals which are equally important. Having Low energy availability (RED-S) can really negatively impact health and performance. What I do know without doubt is that I worked really hard this year, my husband worked really hard this year to support me and Dara, that Team Clif and Team Canada had my back and that we really enjoyed the process of returning to a full World Cup race season 3.5 months postpartum in an already crazy year which ultimately means that this season was the hugest success. 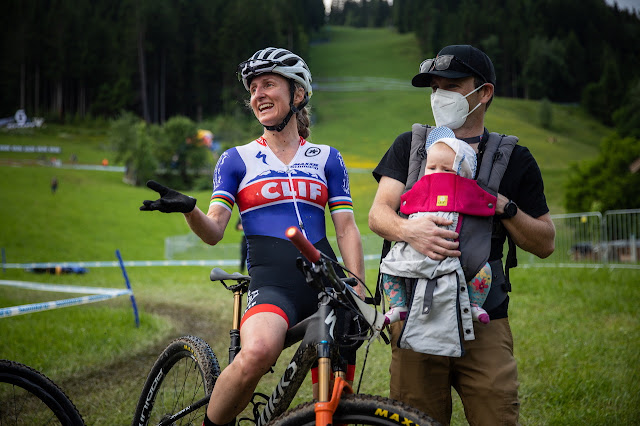 Thanks for following our journey

Sonya said…
Thanks so much for sharing this important message and for some of the specifics! It seems like more athletes are gaining the confidence and desire to come back to sport after a baby. Posts like these ones help pave the way and give context in a nuanced area that is so individual. Congrats on a season you are proud of, being healthy along the way, and doing what looks like an amazing job of balancing the joy of being a mom and the pursuit of being your best athletic self!
12:05 PM

Meghan said…
Love this! Thanks for sharing. You are an inspiring woman!
12:40 PM

Kika said…
Thanks Meghan and Sonya! I hope it helps. It’s a lot to balance but really fun and rewarding if you are open to just seeing what is possible without too much pressure on yourself.
4:26 PM